Greetings, PassMeFast readers! If you’ve been eagerly waiting for the next instalment in our Theory Test Topics Explained series, your wait is over! We’re back and ready to help you build up your theory test knowledge so that you can breeze through the theory test. This month, we’re looking at the sixth topic out of the fourteen used by the DVSA’s question bank: motorway rules.

We’re going to walk you through what this topic is all about, give you example DVSA questions and case studies, and share some revision resources. Enjoy! 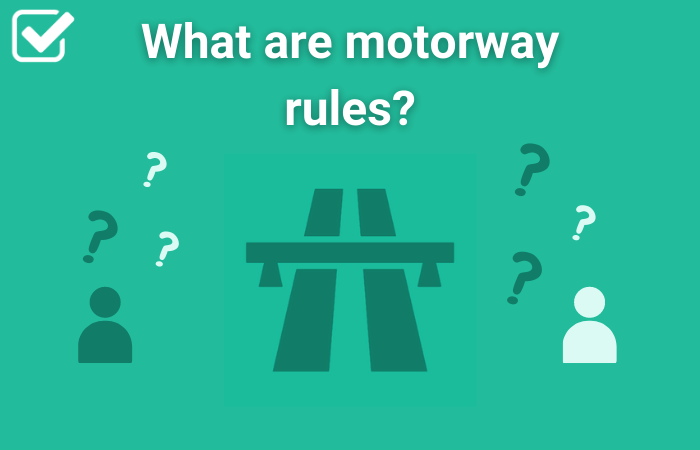 The sixth topic from the multiple-choice section in the theory test is motorway rules. When it comes to driving on the motorway, small mistakes can have huge consequences. If you’re not familiar with speed limits, lane discipline and even what to do if you break down on the motorway, you could end up endangering yourself and the motorists around you.

And that’s where the theory test topic motorway rules comes in! If you revise properly, you should be more than prepared for taking to the motorway with your instructor during lessons. To help you along, we’ve broken the topic down into smaller sections. Make sure you take your time, though—we’ll be giving you a mock test below!

✓ Road users not allowed on the motorway

First things first, not everyone is allowed on the motorway. For obvious safety reasons, learner drivers are only allowed to drive on the motorway if they’re being supervised by a DVSA-approved instructor in a car with dual controls. Given how dangerous motorways can be for those who are unfamiliar with them, this helps ensure that learners are only taking to them when they’re ready and with someone who is experienced.

Additional road users prohibited from using the motorway include:

When you take to the motorway, you’ll notice various types of signs and signals. (We’re focusing on signals here, so if you’d like more information on motorway signs, head on over to our guide here.) It’s important that you’re able to identify these signals quickly and figure out what action(s) you need to take.

Amber flashing lights tell you that there’s a hazard ahead, e.g., an accident or heavy fog. This signal might come with a temporary maximum speed limit as well. When you see this signal, you need to adjust your speed accordingly and continue until you pass a signal that isn’t flashing.

If you spot red flashing lights, or a red X above your lane, it means that it is closed and that you should not be driving in it. Similarly, if you spot a red light flashing in the central reservation, or at the side of the road, you must not go beyond the signal in any lane.

The legal speed limit on motorways is 70mph unless you’re towing a trailer, which brings it down to 60mph, unless otherwise specified. As you’ll notice when you start driving on motorways, however, it can be all too easy to get carried away with your speed—many drivers end up ignoring speed limits altogether. This is where accidents happen, which is why it’s vital that you check your speedometer regularly.

You’ll have noticed that we said ‘unless otherwise specified’. This is because temporary maximum speed limits are often brought in on motorways in order to improve the flow of traffic, usually because of detected hazards or delays. You’ll see these speed limits marked above your lane in red or amber lights.

All drivers should use the left-hand lane of the motorway unless they’re overtaking a slower-moving motorist. When this happens, you’ll use the middle or right-hand lanes to do so. Once you’ve safely overtaken the motorist, however, you’ll need to return to the left-hand lane to avoid what’s otherwise known as ‘middle lane hogging’.

Before we get into what overtaking involves, we’ve first got to highlight certain vehicles that aren’t allowed to use the right-hand lane on the motorway:

Overtaking on the motorway

You should only overtake on a motorway if it is safe and legal to do so. Before making any moves, you need to check your mirrors and blindspots carefully to ensure that the lane you’re joining is clear—make sure you check for motorcyclists, who might be weaving through lanes. Bear in mind as you do that traffic might be travelling faster than you think. Once it’s clear, you need to use your indicators and move.

As soon as you’ve overtaken the vehicle, you need to move back to the left-hand lane. You should never:

And that’s not all! If you’re overtaking at night, you’ll need to be even more cautious. Poor visibility can make it extremely difficult for drivers to accurately judge the speed and distance of other motorists.

It’s absolutely vital that you plan ahead when driving on the motorway. You need to keep your eyes peeled for signals or signs that indicate when your intended exit is approaching. You’ll typically leave the motorway by a slip road on the left, unless a sign indicates that a lane leads directly off the motorway. This means that you will need to move into the left-hand lane well before the exit approaches. Given how erratic traffic can be, you don’t want to leave it too late, or you’ll run the risk of missing it and having to continue onward.

Signal left in good time and reduce your speed on the slip road. On the motorway, you’ll be driving at a high speed, so you’ll need to move down to a lower gear, brake progressively and keep an eye on your speedometer. Be careful, as some slip roads have sharp bends.

✓  Stopping on the motorway

You might also need to stop on the motorway if you spot red lights appearing on overhead signs. In this case, you’ll stay in your lane until traffic starts moving again, or you’re told to move into a different lane entirely.

✓ Breaking down on the motorway

If you’re driving on the motorway and notice that something’s off with your car, e.g., it’s making strange noises or you’re beginning to lose control, you need to pull over onto the hard shoulder. This will help keep you safe, stop you from obstructing traffic and make it easier for breakdown services to reach you. Once you’re there, turn on your hazard warning lights so that other road users know that you’ve broken down. Next, you and your passengers (if you have any) will need to get out of the car—avoid getting out on the driver’s side, as you don’t want to get in the way of oncoming traffic.

You shouldn’t try to fix anything yourself, even if you know what you’re doing. Instead, you should get in touch with your breakdown provider. To do this, you’ll want to locate an emergency roadside phone. Even if you have your mobile phone with you, it’s often easier to use the emergency phone, as it helps emergency services locate you faster. When you get in touch, they’ll ask you what the situation is, whether you have passengers and if you have your own breakdown provider.

After making the call, you and your passengers should wait near your vehicle, but far away from the carriageway and hard shoulder. If you feel at risk from another person, get back in your car and lock the doors. Once your car has been seen to and everything’s good to go, you’ll need to build up speed on the hard shoulder before joining the motorway once more.

You can get even more information about this over on our guide to what to do when you car breaks down!

If you’re struggling to remember everything we’ve covered so far, we’ve summed it all up in the image below! 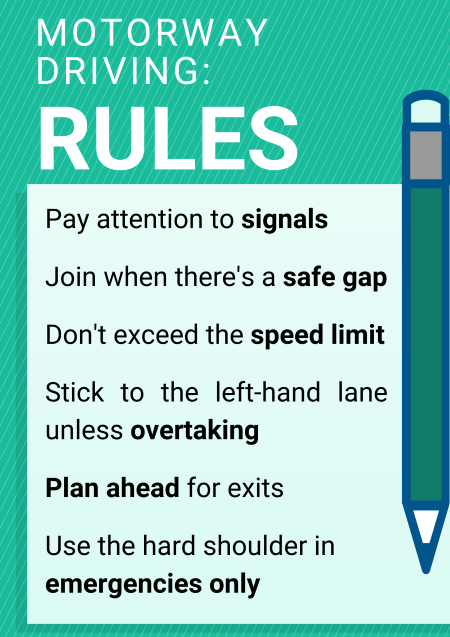 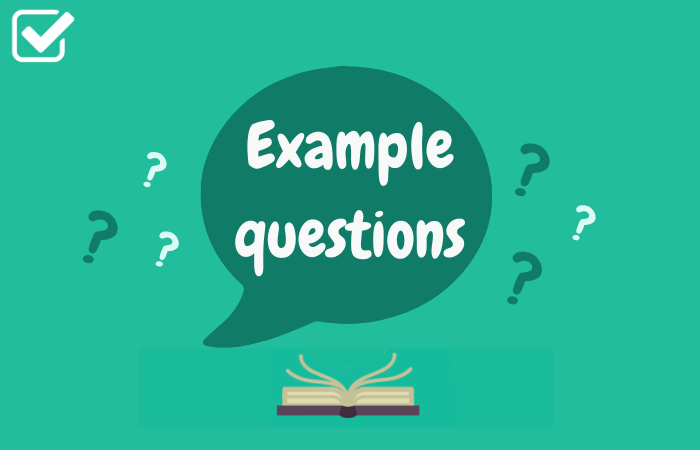 Now that you’ve made your way through our guide to motorway rules, it’s time for you to put your newfound knowledge to the test. In the actual multiple-choice section of the theory test, you’ll be asked to answer 50 questions—you’ll need to get 43 correct in order to pass.

In the quiz below, however, we’ve chosen ten example questions that centre around the theory test topic motorway rules. This will help give you a rough idea of how well you know the topic. If you do well, then you know you can cross it off your list and proceed onto the next theory test topic. Good luck!

Let us know how many questions you got right in the comment section below!

Next, it’s time for you to apply your motorway rules knowledge to real life situations. We’ve compiled five case studies that will require you to assess a scenario on the motorway and pick out the safest course of action. In the actual theory test, you won’t be dealing with written case studies. Instead, you’ll watch a short video clip and answer three questions.

Let us know how many questions you got right in the comment section below!

How to revise motorway rules 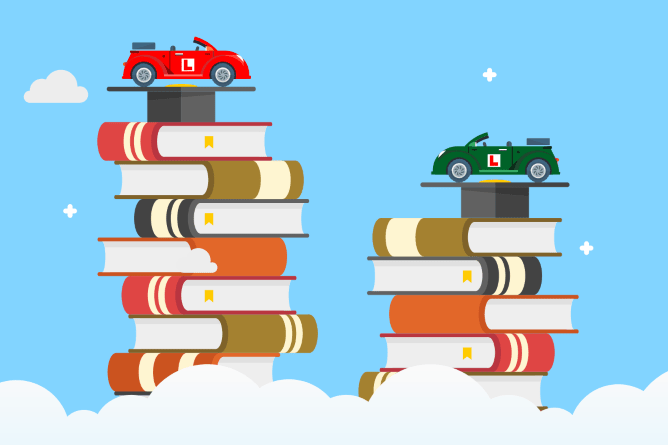 Congrats! You’ve officially made it to the end of our guide to motorway rules and, hopefully, aced your way through our tests. Don’t assume this means you’re done with the topic just yet, though! Instead of moving on immediately, you should spent a bit more time refining your knowledge of the topic to make sure you’ve really grasped it.

To help you do this, we’ve compiled a lit of tests you can take:

And that’s not all we’ve got for you! If you’re keen on passing your theory test first time, consult our guide to how many hours you need to revise. From there, you can create your own revision schedule. We’d then recommend downloading a theory test revision app so that you can revise on the go!

Looking for more? Check out our other theory test topic breakdown instalments: