If you’re a learner, you’re sure to have heard plenty of driving advice from everyone from your parents to your friends to your next-door neighbour’s hairdresser. The trouble is that so much of what people claim about driving simply doesn’t stack up—and this is certainly true of a number of theory test myths.

Here in this article, we’ll reveal the truth about the theory test, helping you to avoid some of the biggest mistakes candidates make and prepare to pass first time. Let’s dive in!

The most common myth we’ve heard (and we’re sure that you have too) is that the theory test is nothing more than common sense. And since (hopefully) we all have common sense, that should be all there is to it—no need to revise, right?

Wrong. Though it’s certainly true that common sense will certainly come in handy when answering many of the questions (just as it comes in handy on the road!), it can’t solve everything.

If it was just common sense, The official DVSA handbook or the AA theory test book wouldn’t be so highly recommended! They both contain official DVSA questions with answers. Revise them thoroughly—they could show up on your test.

Questions on your theory test may include, for example, the minimum legal tread depth of a tyre, the braking distance of a car at 60 mph, or identifying the sign that indicates that a contraflow system is in place . These aren’t things that we all have as inbuilt knowledge—instead, you’ll have to learn them. 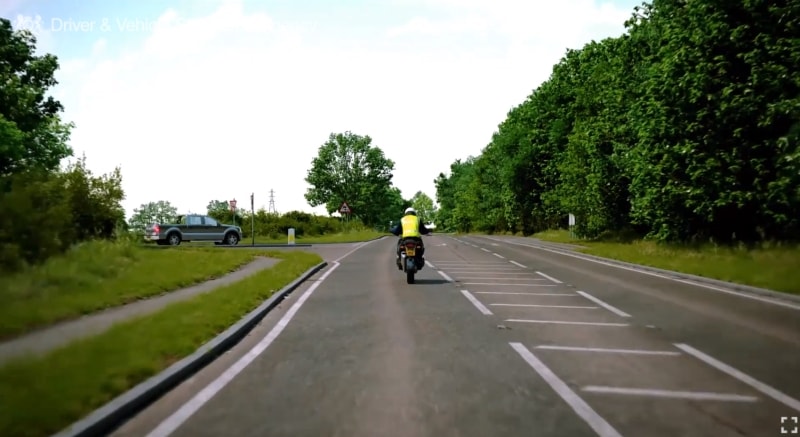 The hazard perception section is one of the trickiest parts of the theory test. During this section, learners watch a series of video clips, and need to click when they spot a developing hazard. Most learners are unlikely to have experienced anything like it before—and, as such, may be a little thrown by it.

With this uncertainty, many have tried to devise strategies for dealing with the hazard perception section. You often hear people saying that you need to click at least once every 10 seconds, or that you should simply click as often as possible to make sure you don’t miss anything.

Of course, the DVSA anticipated the possibility that learners may try and click in a pattern or use other techniques to pass—and, as always, they’re one step ahead. The hazard perception section includes technology that detects when candidates’ behaviour appears to be suspicious. If it believes that you’re simply clicking in a pattern, it will give you a score of 0!

Many of the common misconceptions about driving stem from one place: that one mate we all have who brags about just how easy everything driving-related is. The one who definitely passed after 5 hours and can do a three-point turn with his eyes shut. And, according to him, everyone—yes, everyone—passes their theory test first time. It’s just that easy.

Oh, would that it were true. In fact, this myth falls apart under even the slightest scrutiny. Think about it seriously: if everyone passed the theory test, why would the DVSA bother to run it at all?

The truth is that the theory test provides a real challenge for learner drivers—and it’s certainly become harder over time. Back in 2007/08, the pass rate was 65.4%. Ten years on, that’s down to just 48.7%—not far above the pass rate for the practical test. You can see the pass rates for the two tests side by side in the graph below. 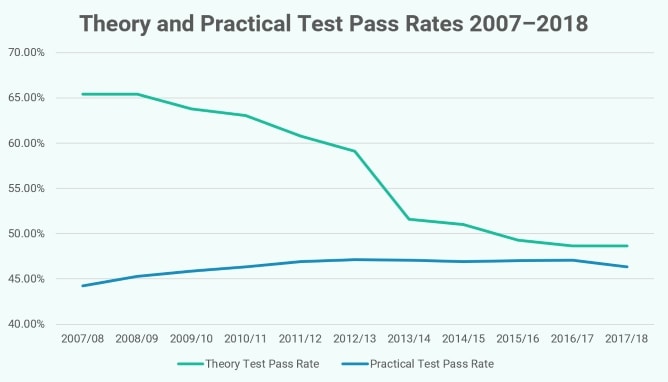 This decline in pass rates isn’t too surprising when you’re aware of the history of the theory test. Indeed, the DVSA have been rejigging, tweaking and perfecting the theory test almost from the moment of its inception.

We totally understand that many learners are eager to get on the road. (There’s a good reason why our name is PassMeFast, after all!) Unfortunately, some learners are under the impression that you can take the theory and practical test incredibly close together—even, in some cases, on the same day.

If you’re aware of the rules behind booking your theory and practical test, you’ll understand why this doesn’t work. The DVSA stipulates that you must pass your theory test before you’re even able to book a practical test. As such, taking both on the same day simply isn’t possible. This is definitely for the best—imagine the stress of two tests on one day! 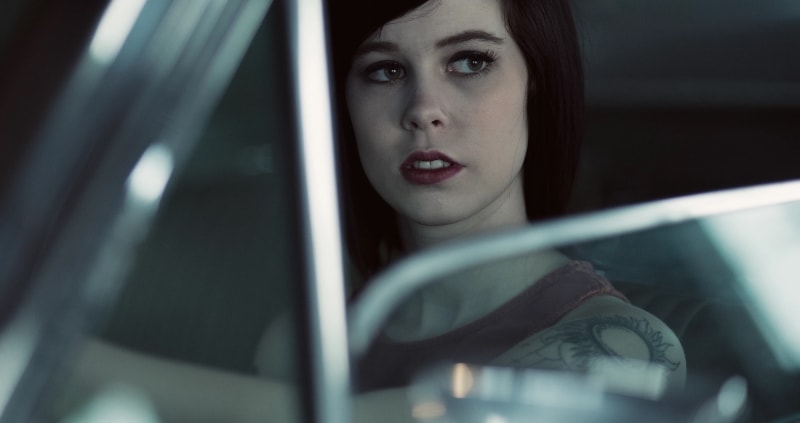 In some ways, this is the reverse of the previous myth. Some learners think that they won’t be able to get behind the wheel of a car at all until they’ve passed their theory test.

Fortunately, this is not the case. For a learner to legally drive on the roads, however, they must abide by the following rules:

Got your theory test coming up? Read up on our top 5 last minute theory test tips. Alternatively, if you’re getting ready for your practical, check out the top 5 driving test myths debunked.