Interpreting all the different types of road markings and signposts can be tricky, especially when you come across ones that aren’t very common. Chances are that the first time you ever heard of the contraflow system was when you were studying for your theory test—and it sounds like a lot to learn, right? Thankfully, it’s actually pretty simple to get the hang of. So, even if your theory test is tomorrow, you can still make sure you get those all important marks.

We’ve got the lowdown on contraflow roads on the motorway, contraflow bus and cycle lanes, and how you should drive when you find yourself in the midst of a contraflow system. By the end, you’ll be the font of all knowledge—on this topic, at least. Here goes!

What is a contraflow system?

‘Contra’ means against, while traffic ‘flow’ refers to the movement of vehicles on any given road. So, a contraflow system is where traffic in one or more lanes on the same carriageway (side of the road) is directed the opposite way to normal—against the flow.

Contraflow systems can be either permanent or temporary. Most commonly, you’ll come across them being used on motorways, to keep traffic moving during periods of roadworks, or on one-way streets, where special bus or cycle lanes allow ‘wrong way’ access to these vehicles.

Where the contraflow system may affect you the most, as a car driver, is when you’re travelling on a motorway or dual carriageway.

By definition, dual carriageways divide traffic travelling in different directions with a central reservation. Everyone on your side will be going the same way: with-flow traffic. It’s much safer to keep drivers separate on these roads, given the high speeds allowed.

When roadworks are taking place, you’ll often find just part of the carriageway closed. In order to keep traffic flowing smoothly, you might be told to merge into another lane, or warned of lower temporary speed limits in place. However, for more extensive works and repairs, or a major accident closing one side of the road, you may find a contraflow system being enforced. The whole of one carriageway will be diverted across the central reservation and onto the opposite carriageway, to run concurrently with the traffic on that side.

Where this happens, you will usually be separated from oncoming vehicles only by traffic cones, and lanes are likely to be narrower than normal. To compensate for these increased risk factors, there will probably be a reduced speed limit in force, which you must observe.

When travelling through a contraflow system, try to get in the correct lane early, keep in that lane, and avoid any attempt at overtaking. You should follow other vehicles from a safe distance, and should not cross the line of cones, as you would end up meeting oncoming traffic.

Even if an emergency service vehicle is approaching from behind, it is recommended that you stick to your side of the road. After all, you don’t want to risk more injuries by putting yourself and others in harm’s way.

One-way streets are generally designed to keep traffic moving, but tend to disadvantage cyclists. They might be forced to use busy routes and dangerous junctions. Because of this, bike users may be tempted to ignore the signs and get round the restrictions by cycling the other way along the pavement—which puts pedestrians at risk.

Separate contraflow cycle lanes offer a safer alternative, allowing cyclists to ride either direction along one-way roads. This enables them to avoid more hazardous routes, and, in many cases, reach their destinations more quickly. Cyclists using these lanes are less likely to be involved in accidents, and are less of a threat to pedestrians on pavements.

As a driver, you need to be aware of which direction any other person is travelling. Although contraflow cycle lanes lessens the risks of those on pedal bikes, but they are still vulnerable road users, and can only keep safe when you observe the rules and give them plenty of room,

Contraflow cycle lanes are sometimes merged with contraflow bus lanes. In these cases, both bus drivers and cyclists will be travelling against the rest of the traffic.

As with their cycle counterparts, contraflow bus lanes are usually found on one-way streets within busy cities. They allow buses to shortcut busier roads, so that they aren’t so often stuck in traffic. This help to keep all road users moving as much as possible.

According to Theory Test Pro, identifying the contraflow bus lane sign was the most commonly failed road sign question on their practice tests during 2017. That’s an easy mark to throw away—and when you’re only allowed 7 mistakes in total on the theory test, every bit of knowledge helps. Thankfully, this sign is one of the more non-cryptic ones. Study it, and you’ll soon be able to recognise where a contraflow bus lane is in force. Here it is, in all its glory.

As you can see, the sign consists of a blue rectangle with a bus on one side and a line down the middle. Arrows each side of the line indicate that buses will be travelling the opposite way to other traffic. So, whether or not you could draw the sign from scratch, you should be able to work out the meaning, so long as you’re clear on what contraflow means. 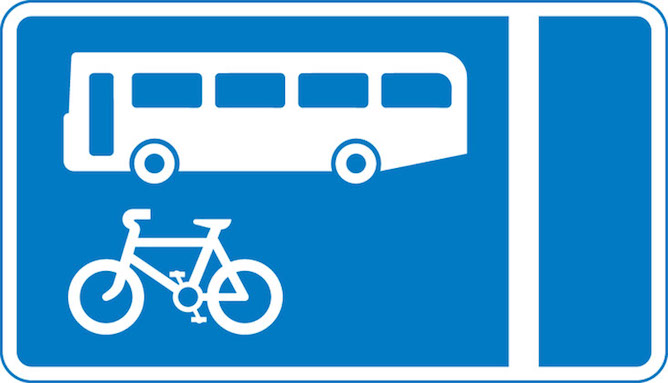 Just as you may be asked about the contraflow system during the theory test, you may also get questions about with-flow bus or cycle lanes. If contraflow means going against grain, then with-flow simply means travelling in the same direction as normal traffic.

Be careful not to mix the two up, especially when identifying signs: the difference between contraflow and with-flow bus and cycle lane signs is that the latter don’t have arrows—everyone is travelling the same way.

The contraflow system on the theory test

There are a number of things you may be asked about contraflow systems on the theory test. Check that you know:

If you’re not sure about any of these, you probably need to do a little more revision before sitting your theory. Read through our contraflow system guide again to grasp the key facts and check out our compilation of theory test revision resources.

If in doubt, start with the Highway Code, which provides vital road information and rules. We advise buying resources like the official DVSA handbook or the AA theory test book. They both contain official DVSA questions with answers. Revise them thoroughly—they could show up on your test.

That’s it on the contraflow system—but do you know when you should enter a box junction?