Road signs adorn the highways of Britain, and if you’re an observant passenger or pedestrian, you’ll have already picked up on a fair few. But as a driver, your knowledge has to go further. Signs and signals communicate vital information and directions, warn of hazards and convey the rules of the road. Interpreting them correctly is crucial to staying safe on the roads—and reaching your destination without lengthy detours!

There’s plenty to learn, but don’t let that put you off. True to form, we’ve put together this guide; it explains the different shapes and colours you’ll encounter, and helps you get familiar with traffic signs that are commonly misunderstood. So, whether you’re preparing for your theory test, are a new driver, or simply want a road sign refresher, here’s what you need to know.

What are the different types of UK road signs?

Before we get to the nitty gritty, here’s a simple guide to the background colours and shapes that make up most of the UK road signs. Learning these will help you work out the type of action you need to take when you come across them on the roads.

Triangular signs warn road users about potential hazards ahead. They always have red borders—used here to suggest danger—and can indicate anything from an upcoming junction to the possibility of wild animals in the road.

Sometimes triangle warning signs are accompanied by a small white sign, providing additional or explanatory text. For example, beneath a pictorial of children, it might say ‘School’. ‘Part time signals’, on the other hand, could help to clarify a traffic light warning sign.

Circular road signs are known as ‘regulatory road signs’: they communicate the rules of the road. There are different colours—red or blue—depending on the type of instruction, but all circular signs are mandatory. That means they must be followed. If you are caught disobeying them, you risk a fine, points on your licence, or a driving awareness course.

Prohibitive instructions—where you must not do something—are signed using a red ring, although some circles are entirely red. The symbol on the sign represents something that is not allowed. Sometimes there will also be a diagonal red line striking through the symbol.

One of the most common regulatory signs is the speed limit sign. You must not drive faster than the miles per hour indicated. In the case of the middle image below, your speed must not exceed 30 mph.

No U-turns allowed
Maximum speed of 30mph
No entry

Blue circular road signs, on the other hand, generally give positive instructions. So, instead of telling you not to do something, they say when you must do something. They’re generally used for minimum speed limits and to show drivers where there’s only one route to follow.


Left turn ahead only
Minimum speed of 30mph
Proceed right only

Rectangular signs relay information to road users. Many of them are direction signs, which might feel outdated in today’s world of sat navs. However, it’s essential to know how to follow directions from signposts, because even though you might use electronics for navigation most of the time, you should never rely on them 100%. If you still need convincing, one candidate in every five is still asked to follow road signs during the independent driving section on their practical test.

They are different colours of rectangular road sign, depending on the type of road you’re on and the type of information they’re giving.

Blue rectangular road signs have white borders, and play two distinct roles, depending on where you find them.

There are 3 main types of white rectangular road signs. They all have black borders and generally use black writing and symbols to get their message across.

Brown signs are reserved for tourist information: they direct road users to attractions (signed from the motorway or an A road) and facilities (signed from an A road). Attractions are defined as places of public interest or pleasure, like museums and zoos. Facilities are ‘tourist amenities’—like a campsite or hotel. The signs usually display a simple pictogram that can be easily and internationally recognised.

Not every attraction or facility is marked with a brown sign; they’re reserved for destinations that would be otherwise difficult for visitors to find.

Yellow signs generally relate to traffic routes during roadworks. They are often temporary signs and give instructions about lane closures (see above, where the right lane is set to close in 450 yards) or diversions.

Some yellow signs show emergency diversion routes. They have no writing, but just display a simple black shape: a square, circle, triangle or diamond. You may never even have noticed these, because they’re often small and used on signs that display a lot of other information as well. If there are planned works or you’re about to hit known congestion, you may be told to follow signs showing one of these symbols. They will divert you off, and then back onto, the road you were travelling on. All in all, a really useful one to know about!

Exceptions to the rules

Some UK road signs don’t follow the normal format, and so they stand out. There are a few some prominent exceptions that you’ll need to know, both for the theory test and for day-to-day driving.

‘Give Way’ is one of the most common road signs—and one that also proves an exception to the rule. It’s a mandatory instruction, but is made particularly easy to identify because it’s an upside down triangle. When you see the Give Way sign, you must give way to those on the more major road ahead, and only pull out when it’s safe to do so.

The Stop sign is another mandatory instruction, but is an entirely unique shape in the world of signs: it’s an octagon. ‘Stop’ is such an important driving instruction that road users need to be able to recognise the sign even if it becomes obscured by dirt or snow. This sign is used at junctions where you must stop—rather than merely giving way—before the solid white line. You can only emerge onto the junction when you’ve checked that it’s safe. 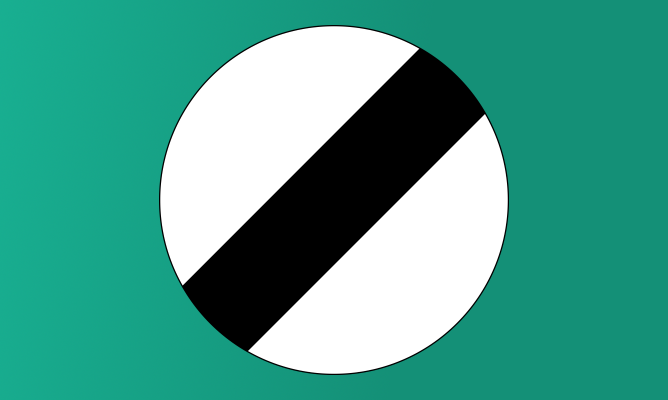 The national speed limit sign is circular, so we know it’s an instruction that must be followed. However, it’s black and white, rather than red or blue, which helps make it instantly recognisable. In practice, it means different things on different roads. You’ll usually come across the national speed limit sign on dual carriageways, where you can drive up to 70 mph, or on country roads, where the maximum is 60 mph.

Some signs can be altered electronically and display messages appropriate to road or weather conditions. They’re often found on smart motorways, where they can warn of queues or road closures ahead. On other roads, variable message signs can tell drivers whether they’re going above or below the speed limit.

Many of the symbols you see on road signs are self-explanatory, but some are much more difficult to work out. There’s no shortcut to learning these types of signs, so it’s really a case of ‘suck it up and study’. That doesn’t mean you can’t make the process a bit more fun though. Once you think you’ve got the hang of them, test yourself with our UK road signs quiz.

Here are a few of the signs that are commonly misunderstood.

You’ve got it: you have to follow road signs. But did you know that you must obey instructions from people in authority? Learn all about police hand signals and what to do when you’re confronted with them.