In the run-up to the practical test, many learners worry about things going wrong. After all, fewer than half get their licence the first time around! Some people, however, are lucky enough to experience the opposite: a faultless test. It’s every learner’s dream—but how many people really pass with zero minors?

Well, wonder no longer. We here at PassMeFast have gone through the stats and are ready to report just how likely it is to pass with zero minors. We’ll also give you a quick primer on what exactly minor (and major) faults really are, and how to make sure you avoid them. Let’s get started!

What are minor faults? 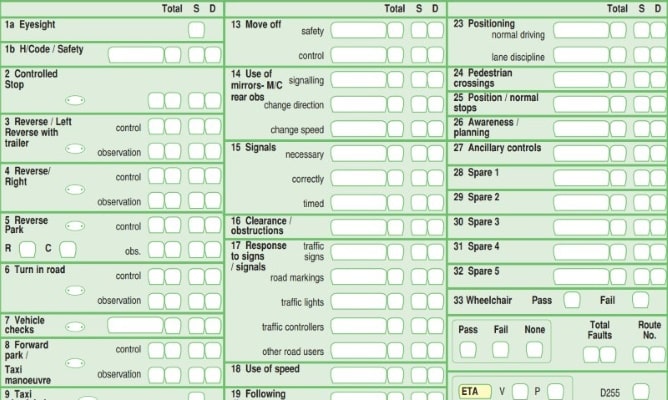 For the uninitiated, the scoring system in the driving test may not be obvious. Fortunately, it’s pretty easy to grasp. The key is to avoid committing any driving test faults. There are three types of fault: dangerous faults, serious faults, and driving faults. When we talk about serious and dangerous faults, we often group them together as ‘majors’. The reason for this is that they have the same effect on your result: even one of either type of fault is an instant fail.

Driving faults, or ‘minors’, are different. While, naturally, you should be aiming to avoid scoring them, getting a minor does not prevent you from passing. In fact, you can still pass as long as you make no more than 15 minor faults. However, in some circumstances, committing a few minor faults in one area may result in the examiner upgrading their severity to a serious fault.

Making a couple of mistakes on the driving test is hardly a rarity. In fact, almost all candidates, whether they pass or fail, make at least one fault of some variety. That’s why passing with no minors at all comes with a particular cachet. But how many people actually pass with zero minors? We dug into the DVSA’s official stats to find out for sure.

Passing with zero minors: the stats

It should come as little surprise to learn that passing your driving test with zero minors is very rare. After all, the pass rate for the driving test as of 2018/19 stood at just 45.8%. To put that another way, you’re more likely to fail any individual test than pass it. With this in mind, it’s easy to see how difficult it is to pass without a single mark against your name.

Nonetheless, each year, some candidates beat the odds and pass with a perfect score. But how many? Let’s take a closer look.

The most recent figures showed that 18,922 candidates passed their test with zero faults in 2018/19. These record-breaking figures represent yet another year where the number of perfect scores has increased. In fact, the number of drivers who pass with zero minors has gone up every year going back to 2006/07, the earliest year for which statistics exist.

It’s worth noting, though, that this represents only a tiny fraction of drivers—1.1%, to be precise. This means that almost 99% of candidates on the driving test will make some sort of fault. So, don’t beat yourself up if you do make an error or two!

Besides, passing with zero minors isn’t even the pinnacle of driving. What about those who not only got a clean sheet, but did so on their first try? Let’s take a closer look to find out.

Passed with zero minors? Time to treat yourself to a set of your own wheels!

How many people passed with zero minors on their first attempt?

Passing with zero minors is already a fantastic achievement. Managing to do it on your very first driving test, though, is something close to miraculous. Amazingly, though, it isn’t actually that rare. In fact, 10,247 candidates managed it in 2018/19—and numbers have been on their way up for a few years.

While overall zero-minor passes have been continually rising since 2006, first-time passes with no minors have had a slightly rockier path. Nonetheless, learners are now considerably more likely to achieve this than they were in the past.

Back in 2007, for example, only around 1 in 190 candidates taking their first driving test could expect to pass with no minors. Today, that figure is 1 in 72. Clearly, it’s still a rare feat—but one that is becoming more common over time.

Where did the most people pass with zero minors?

Assessing things at the other end of the scale is a little trickier. Certain test centres saw no candidates at all pass with zero minors on their first attempt. However, in the case of centres such as Lairg, which only saw nine first attempts in total, it feels a little harsh to judge this!

We’ve also highlighted Mallaig on our map above, which also saw no first-attempt zero-minor passes. This comes as a surprise, given that the test centre had the country’s second-highest pass rate—but there were only 16 first attempts here!

Were men or women most likely to pass with zero minors?

Over the years, women have dominated the theory test, while men have come out on top in the practical test. With this in mind, we couldn’t resist another chance to see how the battle of the sexes played out. Once again, there are no stats covering all zero-minor passes here. However, we do have a gender breakdown of first-attempt passes with zero minors. So, how do things look?

As it turns out, the stats are in line with usual results, with more men than women passing with zero minors. Over the period since 2007, men have been around 35% more likely to get the coveted zero-minor pass. In fact, that gap has actually grown over time. The good news here, though, is that both men and women are far more likely to pass with zero minors than they used to be, with the number of candidates doing so more than doubling since 2007.

How does the points system in the driving test work?

The driving test works on the basis of negative marking. In other words, you’ll score points for things you do wrong, which are known as faults. There are different categories of fault: driving faults, serious and dangerous faults. Even one serious or dangerous fault (or ‘majors’) on your mark sheet means you’ll automatically fail. Driving faults (or ‘minors’) indicate problems that won’t, on their own, prevent you from passing. You can still pass provided you score 15 or fewer minors.

What are the differences between dangerous, serious and minor faults?

A dangerous fault, as the name suggests, is one that “involves actual danger to you, the examiner, public or property”. An example of this would be emerging from a junction without looking, forcing another vehicle to come to a stop to avoid hitting you.

Serious faults, meanwhile, are those which are potentially dangerous. Imagine the same scenario above, but without any other vehicles present. Even though you would not have caused any actual danger, your actions had the potential to put others at risk. For this reason, examiners treat serious faults with the same severity as dangerous ones, and both result in an automatic fail.

The final category, minor or driving faults, refers to problems which are not potentially dangerous. However, should you continually make minor faults, they could become serious. It’s for this reason that the threshold is more lenient, with candidates allowed to commit up to 15 minors.

Can minor faults add up to a major?

What do the different categories on a driving test mark sheet mean?

Each of the categories on a mark sheet refer to a specific competency you must demonstrate during your test. Examples of these can include dealing appropriately with junctions, pulling over safely, and using signals correctly. Next to the name of each category are boxes for minor, serious and dangerous faults. As a result, the emptier your mark sheet, the better! For a full explanation, read our guide to the driving test mark sheet, which breaks down each category.

Why does the eyesight category only have a box for serious faults?

As far as the DVSA is concerned, there’s no such thing as a ‘minor’ eyesight fault—you either meet the minimum requirements to drive, or you don’t. Remember: you must be able to read a licence plate from a distance of 20 metres. Fail to do so, and the examiner will automatically terminate your test. Worse still, the DVSA will revoke your licence. Wearing glasses or contact lenses is acceptable, provided you also do so while driving. Read our article on eyesight standards for driving for full details.

Is stalling a major or minor fault?

Despite the common driving test myths, stalling isn’t necessarily an automatic fail. Of course, it certainly can be if it results in a (potentially) dangerous scenario arising. However, if you restart the car correctly and drive off safely, you may get a minor at most. We’ve written a guide covering everything you need to know about stalling, from its causes through to the actions to take when you stall.

What happens if I pass with zero minors?

While you’ll certainly have earned your fair share of bragging rights, there’s no specific difference between passing with zero minors and scraping through with fifteen. In other words, you’ll have to go through the same process as any other new driver. Get more information by checking out our guide to what happens after you pass your driving test.

Am I a better driver if I pass with zero minors?

It’s certainly true that zero minors is the best result possible in the driving test. As such, it’s likely that you’ll be able to continue driving confidently and safely after getting your licence. However, it’s far from a perfect predictor. Many candidates may underperform on the test due to nerves, only to go on to become a fantastic driver in the long run.

Will my insurance premiums be lower if I pass with zero minors?

Unfortunately, there’s no evidence that insurers will charge you less based on the number of faults you made during your test. Instead, some of the best ways of reducing your premiums include opting for a cheaper car to insure, investing in security measures, and building up a good driving record. Take a look at our young driver insurance guide for more details.

I think the result of my test was unfair. Can I appeal?

Successfully appealing the result of a driving test is rare. However, if you believe that your examiner failed to follow DVSA regulations, discriminated against you, or acted maliciously, you may be able to appeal. Do note, though, that even a successful appeal cannot turn a fail into a pass. Instead, you may be eligible for a free retest.