From our office in MediaCityUK, Salford, we’ve been transforming driving since 2015. The result: hundreds of learners in Greater Manchester have already passed with us. Within that impressive statistic is a wealth of individual stories; we collated just a few in our top 10 favourite pass photos. But every story needs a setting, and for many of our learners, it was at one of Greater Manchester’s driving test centres. In this guide, we’ll run through each of those test centres, to give you a sense of what to expect when taking your test in this county.

Located just to the northwest of the town centre, the Atherton driving test centre is also a convenient option for learner drivers in the towns of Wigan and Leigh. It’s also a suitable alternate option if you live in the Bolton area. The nearest train stations are Hag Fold and Daisy Hill. If you take your test here, you’ll be driving on a mixture of rural and residential roads, including the A577 and A58 roads.

Our passes at Atherton include Dan, who had this to say about his PassMeFast experience:

They sorted everything out for me and found me a fantastic instructor called Ann. I passed first time and would highly recommend 5*!

Want to meet an instructor who covers the Atherton area? Meet our ADI Ann!

Bolton driving test centre is located just to the south of the town centre, making it a great option for anyone in the Bolton and Farnworth areas. Learners in Radcliffe, Worsley, Swinton and Bury may also wish to look into taking their test here. The centre is located around 20 minutes on foot from Bolton train station. If taking your test here, your test route is likely to feature A roads such as the A666 and A676.

With one of the best pass rates in Greater Manchester in 2016/17, it’s of little surprise to find we’ve already helped learners such as Reece to pass first time at Bolton. Here’s what he had to say:

Noel was an amazing instructor; very patient and encouraging. I passed first time! 5*s and would 100% recommend.

Bredbury driving test centre is one of two major test centres in the Stockport area. It’s also well placed to serve candidates in Marple, Tameside, and South Manchester. If travelling by train to this test centre, your closest options are Brinnington and Bredbury. Given the test centre’s location, it’s highly likely that you’ll spend part of your test on the busy A560 and A6017 (Ashton Rd). Nonetheless, you’ll need to be versatile, as rural roads will feature too.

Amongst our distinguished PassMeFast alumni from Bredbury was Vicky. She passed her test with Fouzia first time, and gave us this great review:

Brilliant! They were so helpful when booking and found me an amazing instructor who really gave me a boost of confidence to then go on to pass my test 1st time!!

Just to the north-east of Bury town centre lies Bury driving test centre. It’s perfect for learners from Bury, Heywood, Ainsworth and the surrounding area. It also functions as a good alternative option for candidates from Rochdale, Middleton and North Manchester. With its urban location, learners taking their test here will need to be adept at dealing with busy roads, such as the A56.

PassMeFast have already helped learners such as Liam to get their licence in Bury. Liam said this about his PassMeFast course:

I wanted a quick way to get back on the road. Picked the 5 hour course and it was done and dusted in a matter of no time thanks to Noel!

Greater Manchester’s newest test centre is the Chadderton driving test centre, which opened in early 2017. It replaces the nearby Failsworth and Middleton test centres. As such, it’s a good option for learners in Middleton, Oldham and East Manchester. The route is likely to be primarily urban, taking in A roads such as the A6104 and A663.

Though Chadderton hasn’t been open for long, we’ve already helped learners to pass here. Jake passed with us first time in July 2017. Check out some of our other summer 2017 passes, and read Jake’s review below:

* As Chadderton test centre opened in March 2017, the pass rate here is based on only one month’s data. This test centre acts as the replacement for both Middleton and Failsworth test centre, which had pass rates of 41.4% and 35.7% respectively prior to closing.

The more southerly of the two test centres in the Stockport area is Cheadle driving test centre. It’s also one of two Greater Manchester test centres based at a fire station, the other being Salford. Test routes here are likely to encompass both country roads and residential areas, providing a challenge to candidates. However, there’s no reason to be too concerned: Cheadle has one of the highest pass rates in the county.

Counted amongst that high pass rate was our pupil Kerry, who got her licence this August. Here she is right after passing! 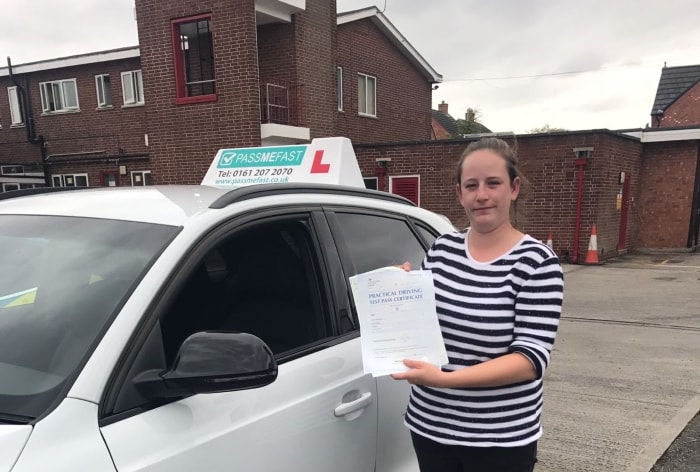 Looking to learn to drive in central or north Manchester? One of the closest places to take your practical is at the Cheetham Hill driving test centre. Its relatively central location means it’s also a good option for learners in Salford. This centre has one of the most urban locations within Greater Manchester. As such, A roads will definitely form a major part of your test. However, you’ll also be spending some time driving in residential areas too, with lower speed limits.

We’ve already helped plenty of learners to get their licence at the Cheetham Hill test centre. One of them was Zara, who passed after a 15 hour course with our high-grade instructor Noel.

The course was amazing, I soon realised where I was going wrong and finally managed to understand how to do a bay park. I would really recommend this to anyone looking to pass.

Holding the proud distinction of Greater Manchester’s highest pass rate is the Hyde driving test centre. Its location is very convenient for learners in the Tameside area. Candidates in Stockport and East Manchester may also wish to consider this as an alternative option. The test centre is a stone’s throw from the Hyde Central train station, whilst also close to Godley and Newton for Hyde. Though much of the route is likely to be residential, busier A roads will feature.

One pupil who passed with us in Hyde was Yasmin, who was kind enough to leave us this fantastic review:

I was able to go over anything I was not yet comfortable with. So pleased with the results—would strongly recommend this company to anyone.

You’ll find Rochdale driving test centre a short distance away from the town centre. As well as Rochdale itself, the test centre serves candidates from Heywood, Milnrow, and Littleborough. Some learners in Oldham may also wish to consider heading to Rochdale for their test. Routes starting from this test centre are likely to extend into nearby rural areas. However, this doesn’t mean you’ll have a totally quiet test—the centre is right next to the busy A6193 and A664.

We’re happy to say that we had plenty of proud passers in Rochdale to choose from here. In the end, we went with Nelson—check out his pass photo: 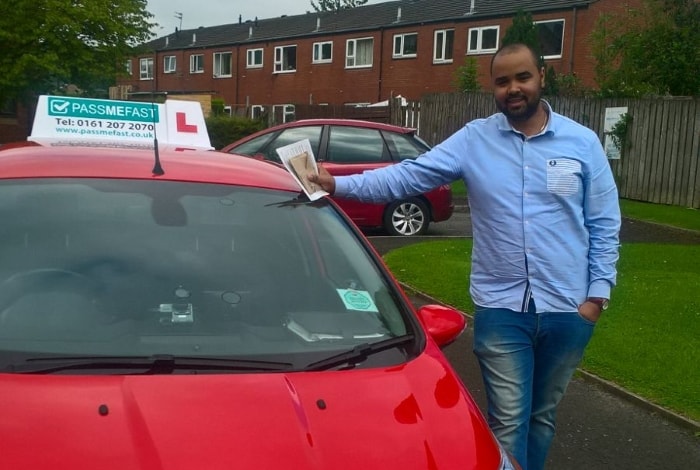 One of the most popular test centres in Greater Manchester is Sale driving test centre. It’s an ideal test centre for candidates from across Trafford, including Altrincham, Sale, Stretford and Urmston. Additionally, Sale is also a useful option for parts of South Manchester. This test centre will feature a real mix of roads: you’ll be tested on urban, residential and rural areas. Nonetheless, you’ll still have a good chance of passing, as Sale’s pass rate is above the national average.

With this test centre’s popularity, is it any wonder that we’ve already helped to create more than our fair share of fully licensed drivers here? Our fantastic PassMeFast alumni at Sale test centre include Se-ember, who was pleased as punch after passing with no minors:

Everything, from the service over the phone, to the ease of bookings and organisation, to the wonderful instructor Jeremy, was top notch! Will definitely be recommending PassMeFast to everyone I know. Managed to pass my test after just a week with Jeremy with 0 faults (I know, right?!) after not touching a manual car for over 3 years!

If you’re looking to take your driving test in Salford, you’ll be pleased to learn that the city has its own test centre. Salford driving test centre is based at the local fire station, which should make it easy to locate! The closest train station is Salford Crescent, whilst those taking the Metrolink should alight at Langworthy. With its central location, learners here can expect busy A roads and residential areas to feature on their test.

Salford test centre has limited opening hours due to its fire station location. Luckily, long driving test waiting times are no match for PassMeFast! You should be aware however, that you might have to take your test elsewhere from December 19th, with the temporary closure of Salford test centre. Amongst our Salford passes is Joseph, who left us this review:

Sue is a great instructor and has a lovely car, she prepared me well for the driving test with what to expect in a really good learning environment.

If you live in Burnage, Chorlton, Didsbury, Withington, or other areas of South Manchester, then one of your closest centres is the West Didsbury test centre. Nearby, you’ll find the Burnage train station, as well as the West Didsbury and Burton Road Metrolink stops. Your test will take in some of the busiest routes in South Manchester, including Kingsway and Princess Road. Meanwhile, you’ll also spend much of your time in residential areas, which come with a range of hazards to watch out for.

We’re proud to say that we’ve already helped plenty of learners to ditch the L plates for good at West Didsbury. One of those happy passers was Tim, who said this about his experience:

I highly recommend PassMeFast. They take as much stress as possible out of booking a test and will work around your schedule.

No matter whether you live in Greater Manchester or elsewhere, it’s our mission to help learners become drivers. Whether you’re a complete beginner looking for a course assessment, or an experienced learner who simply needs a refresher course, we can help you pass. Get some useful test advice in our guides:

Live outside Greater Manchester? Check out our full essential guide series by following the links below.