Your instructor’s told you it’s a no-no, but you’re still not sure why. Your sister’s best friend does it, but she doesn’t have to prove herself to anyone. Crossing your hands on the steering wheel is one of those topics that leaves a lot of learners confused. Is it allowed? Will crossing your hands result in an instant fail on the driving test? Does anyone, including your future examiner, even know the rules?

Well, we love to be the bearer of good news—and the good news here is twofold. One, because we know how steering is marked on the practical test, and two, because we’re going to tell you all about it. Oh, and three: you won’t even end up with a fault, let alone a fail, if you cross your hands…. so long as you do it right.

How is steering marked on the practical test?

Steering comes under the ‘Control’ section of the driving test, which examines your ability to use the car’s primary controls, like the steering wheel, foot controls and handbrake, safely and smoothly. To fulfil the safety part of the brief, you’re expected to remain in full control of the vehicle at all times. If you aren’t, you’ll end up with a fault, and could potentially fail the test.

If you think the guidance on steering sounds quite vague, you’d be right. While UK driving instructors tend to teach certain techniques in preference to others, you’re pretty much allowed to steer in any way you see fit—so long as you achieve the overriding objectives of being safe and smooth.

So, forget what you’ve heard. Crossing your arms is perfectly acceptable on the driving test, as is positioning your hands in an unconventional way. Myth: busted!

Will I fail if I cross my hands on the driving test?

As we’ve just seen, your driving examiner has no right to fail you purely and simply on the grounds that you crossed your hands. However, that doesn’t mean it could never land you in trouble; just because you can do something, it doesn’t always mean you should. Think about execution and situation. It all depends on how and when you steer this way, and what impact that has on your level of control.

Probably part of the reason this myth came about is that crossing your arms sometimes has the potential to be more risky than other steering methods. There are two ways in which you might end up with crossed hands on the steering wheel. It’s important to distinguish between them, because while one might well get you a fault in the practical, the other probably won’t.

Keeping your hands in a fixed position as you turn

We’re not talking here about small adjustments of the wheel to accommodate slight bends in the road, where keeping your hands in position is absolutely appropriate. No, we mean taking a sharp corner or turning at a junction without taking your hands off the wheel. Sooner or later, your arms will end up crossed and in quite an awkward, tangled position. This technique will usually see you lose some level of control. That means you’ll probably get a fault if you end up doing this on your driving test. Let’s take a look at why.

On the whole, it’s best to avoid crossing your hands in this manner. You aren’t in a good position to navigate the road layout, meaning the situation has the potential to become dangerous very quickly. And, because of the obvious safety implications, that’s something that will result in a failed test.

The hand over hand technique sees you steer by pulling on the wheel, then crossing one hand over to continue the turn. Here’s how it goes:

This is generally considered to be a far safer method than simply keeping your hands on the wheel. You’re proactively crossing your hands, rather than your whole arms, meaning they will be crossed for a much shorter time and in a less awkward position.

However, hand over hand steering is not commonly taught in the UK because:

On the other hand, if you find hand over hand steering natural and you’re able to do it well, there’s no real need to change your technique. You won’t be penalised for it by your driving examiner.

So, as with most things, it’s not cut and dry as to whether crossing your hands will see you fail your practical test; it’s the execution and impact upon your driving that you’ll be marked upon.

What’s the best way to steer? 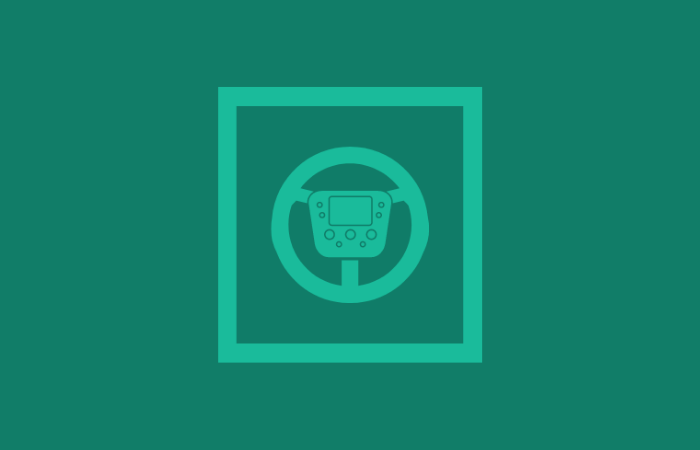 Although not a requirement for passing your practical, pull and push steering is still the predominant technique taught in UK driving lessons. It involves pulling down with one hand, then pushing up with the other as you turn. Your hands never cross on the wheel with this method.

Slide both hands up to 12 o’clock
↓
Pull down with one hand (the one that corresponds with the way you wish to turn), while sliding the other down the opposite side
↓
Your hands should meet at 6 o’clock
↓
Pull upwards with your opposite hand until it reaches 12 o’clock, sliding the other hand up the other side
↓
Your hands should meet at 12 o’clock
↓
Repeat as required,
or
Straighten up by reversing the process (for this you may wish to push first—it’s totally up to you)

Some driving instructors question why we still teach the pull and push method, since hand over hand steering isn’t as risky as it was once thought to be. The answer is that pull-push teaches you strong hand coordination and gives you a great level of control. Once you’ve got the hang of it, it’ll become second nature—and you’ll be able to steer smoothly and accurately through bends and junctions without giving it much thought.

Another popular driving myth is that driving examiners will penalise you for placing your hands in the ‘wrong’ position on the steering wheel. In actual fact, you are allowed to hold the wheel however you want, with the caveat we’re all used to by now: so long as you can maintain control of the car. This includes ensuring you’re ready to use your secondary controls, like your indicators, on the stalks either side of the steering wheel.

During your driving lessons, you’ll probably be taught to position your hands at ‘10 and 2’ or ‘9 and 3’. These refer to the corresponding numbers on a clock. Either of these positions gives you good control, and helps you to get ready for the pull-push technique for when you get to a junction or sharp corner.

Although 10 and 2 was the preferred grip traditionally, lots of people actually find 9 and 3 more comfortable. Your arms fall closer to your body, so you’re able to rest them a bit more and feel more stable. Whichever is most natural to you is likely to be the hand placement that serves you best. Just make sure you take your hand position into account when you’re setting up the steering wheel.

Oversteering is when you steer too sharply for the road layout. It’s dangerous because you could either hit the kerb, or put yourself into the path of oncoming traffic.

You’re less likely to oversteer if you keep your eyes on the furthest point you can see in the middle of your lane, without your eyes straying across another lane. This point will move as you make your turn; keep aiming for the new point and it’ll keep your direction bang on track.

Remember as well that power steering does a lot of the work for you; your job is simply to guide the wheel. As you’ll know if you’ve ever played a driving video game, small movements go a long way in a car.

Poor timing: turning too early or too late

Cutting corners isn’t a good look; neither’s having to overcorrect your steering because you’ve driven too far before you start to turn. Either way, you’ll pick up a fault for getting your steering timing wrong on your test. If you’re struggling with knowing when to steer left or right, take a look at our guide to road positioning.

Well, there you have it. Crossing your hands on your practical test won’t automatically result in a fault or fail (although in some instances, the consequences could).

Love a good myth-bust as much as us? Take a look at whether stalling will cause you to fail your practical and other common misconceptions about the driving test.