No matter whether your practical test is months away or right around the corner, we’re willing to bet that you’ve heard plenty about it. In fact, everyone seems to have an opinion, a “fact” or a horror story to share. Unfortunately, not everything they say is completely accurate. Driving test myths abound—and while you might think it’s easy to separate the fact from the fiction, some stories have become so prevalent that it’s not always as simple as you might hope.

It’s our mission here at PassMeFast to make sure learners are ready for what really happens during the driving test. After all, the more you know, the more prepared you’ll be—and the more likely you are to pass! That’s why we’ve set about to dispel some of the most common driving test myths out there and provide you with the truth.

① “Driving examiners have a pass quota… and they hate learners”

Failing your driving test can be a disheartening experience—you’ve gone through weeks of training, only to fall at the final hurdle. Most learners eventually come to see this as a valuable lesson, and a chance to work on their shortcomings. Others, however, try to shift the blame to someone else—and that someone is usually the driving examiner. In fact, learners’ frustration with examiners is so strong that many of the most common driving test myths concern them.

We’re sure you’ll have heard someone claim, for example, that all driving examiners have a pass or fail quota that they must meet. It’s the perfect excuse for a learner who failed, as it takes the blame completely out of their hands. Of course, it also couldn’t be further from the truth. There is no such thing as a pass quota—the only number that determines whether you pass or fail is the number of faults you accrue during your test. (It’s also interesting to note that the learners who repeat this claim when they’ve failed a test suddenly forget all about “fixed results” once they’ve passed!)

Frequently linked to this myth is the idea that examiners are a grumpy old bunch who will simply fail anyone they don’t like. After all, they have plenty of reasons to be annoyed: in recent years, their workload has sharply increased—more students, more tests to fit in the day and no financial reparation in return. Plenty of reasons to fail students on purpose, then? Of course not. Examiners have nothing to gain from failing you. Indeed, if they did fail you on purpose, they’d only have to put up with you again once you return to retake your test!

② “If you stall the car, you will automatically fail”

It’s easy to see why so many students believe this particular myth. Stalling on your test definitely isn’t ideal, after all! However, the severity of the fault varies depending on the context of the situation. In fact, it’s not the action of stalling a car that can lead to an examiner failing you—it’s the actions you take after stalling. Reasons why you might fail, for example, include panicking, repeatedly stalling without correcting your mistake, or putting other road users in danger.

Speaking from personal experience, it is indeed possible to still pass after stalling. I managed to stall the car a few times during my test. While it was a stressful experience (I was definitely close to tears!), I still passed. Want to know why? It’s because the examiner was watching how I reacted to the entire ordeal. If you do stall on your test, the trick is to keep calm and react as safely as possible. Restart the car and evaluate the road before setting off again. Do this, and the examiner won’t have a reason to fail you.

Other myths in the same vein include examiners failing students simply for taking the wrong turn. Fortunately for those of you who haven’t got the best memory, you won’t fail your test for forgetting or misinterpreting a direction given to you by the examiner. It’s a driving test, after all—not a memory test! If you take a wrong turn, the examiner will give you new directions to get you back on the right track. Similarly, if you forget a direction, simply ask the examiner to repeat themselves.

On the surface, this piece of advice might seem like a good idea at the time. After all, driving slowly will surely tell the examiner that you’re a safe driver, right? The answer is a definite no. Instead of seeing a safe and considerate driver, the examiner will assume that you don’t know how to control the car properly—or that you’re scared of the road. Either way, you’re hardly giving them evidence that you’re ready to be a qualified driver.

Taking the examiner’s opinion of your level of confidence out of the equation, driving slowly can also be dangerous. If you’re travelling at a snail’s pace, it will lead to a queue of cars driving behind you. A number of situations can arise from this. If a car behind you is getting impatient and tailgating you, it could cause an accident if you were to stop suddenly. Similarly, impatience could lead to a driver speeding ahead of you to avoid getting stuck behind you—potentially creating a serious hazard.

Showing frequent hesitation when driving also won’t gain you any favour from the examiner. If you wait for 10 minutes at a junction, for example, even though you could have moved off several times over, it won’t come across well. Indeed, if you hesitate and freeze up, you could cause a major accident. The examiner will understand, however, some degree of test day nerves. After all, I didn’t just stall on my test—I also ended up giving way to cars on a mini-roundabout, even though I had right of way. The examiner certainly gave me an earful about it during my feedback!

Most driving schools—PassMeFast included—will tell you that you need around 40-50 hours of professional tuition overall before you attempt to take your first practical test. Of course, not everyone agrees with this suggestion. We’ve lost count of how many learners call up and tell us that they’re test-ready and raring to go after just a few hours in the car with their friends or family.

Guidelines, however, are in place for a reason. If you go in for a test before you’re ready, you could end up putting yourself, other road users and the examiner in danger. And if you have a particularly awful experience on your test, it could set you back months in terms of confidence. With that in mind, we always urge learners to get the right amount of tuition before they go in for their test.

Of course, every learner is different. Some pick up skills in barely any time at all—one of our past students, Ruhith, passed after only 25 hours of tuition! Others, by comparison, need many more lessons before they’re confident enough to take their test. Learning to drive can be a long process, but it’s necessary in helping you build up vital skills like clutch control, speed awareness and hazard perception.

⑤ “The driving test is harder to pass now” 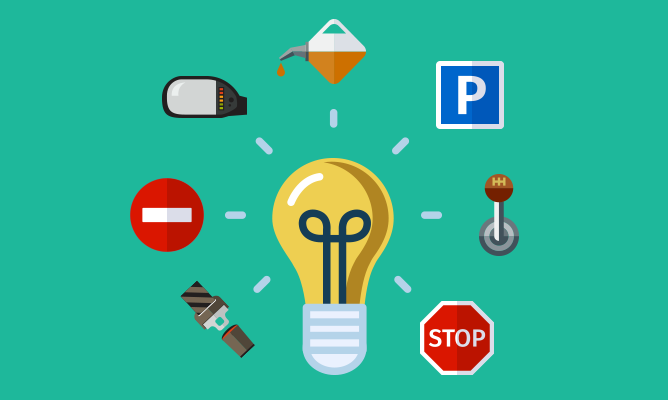 The difficulty of the driving test is entirely relative to each learner. Some have no problems with the test format, whilst others wish they’d been able to pass years ago when the test was “easier”. Of course, there’s no doubt that the practical test is challenging—it’s certainly changed a lot since its inception. Learners nowadays have to complete more independent driving, use sat navs and confidently tackle various manoeuvres—to name just a few of the major innovations!

However, while you certainly will need to work hard before you get that shiny new licence, this doesn’t mean that you should give up before you start. People pass the driving test every day—and if they can do it, so can you! Remember that the driving test simply condenses various aspects of real-life driving into a shorter time span. In other words, nothing you’ll need to demonstrate here is out of the ordinary—all the skills you demonstrate here will be necessary for you to drive confidently on a day-to-day basis.

The key to passing, therefore, isn’t to bury your head in the sand, but instead to put the effort in. While we can’t give you the average number of attempts it takes to pass the test, we can say that those that take the time to work on their weakest areas and push themselves end up getting the result that they want.

1. Will the test centre provide a car on the day of my test?

No. There’s no such thing as a “special car” provided by the test centre. You’ll have to use your instructor’s car, or your own, if it passes the DVSA’s guidelines. For more information about this, read up on taking the test in your own car.

There’s always a lot of confusion surrounding this, but the answer is actually quite simple. The only things you need on the day of your test are your provisional licence (so, make sure not to lose it!) and a car to take the test in. The DVSA also states that you must bring your theory test pass certificate. In practice, examiners won’t always ask for this, but it’s better to bring it to be safe!

3. Does my instructor have to sit in on my test?

No—it’s entirely up to you. Some students see it as a comforting presence that offers extra reassurance, whilst others worry about making mistakes in front of them. As long as you let them know your decision in advance of the test, you’ll be fine. Alternatively, you can have a friend or family member present, provided that they don’t interfere with the test in any way.

4. Will I have to perform an emergency stop in my test?

You have a 1 in 3 chance of being asked to perform an emergency stop during your test. As such, you should make sure you’re comfortable with it before you go in for your test. You’ll also be asked to demonstrate one manoeuvre: pulling up on the right, parallel parking or bay parking.

5. When will the examiner ask me the “show me, tell me” questions?

The examiner will ask you one “tell me” question at the start of your test—before you start driving. They’ll then ask you the “show me” question whilst you’re driving, e.g., “Show me how you would wash the windscreen”.

6. How long will the practical test take?

It will take approximately 40 minutes overall. This will, of course, vary if you run into traffic, or if unforeseen circumstances occur, such as a medical emergency.

7. Can anyone guarantee that I will pass?

Yet another driving test myth! A lot of driving schools offer “guaranteed passes”, but they can’t 100% guarantee that you’ll actually pass your test. The smartest move is to invest in your own tuition. Put in the work, and you can guarantee your own success!

It’s not the end of the world if you fail—you’ll just have to wait 10 working days to be able to take another test. You can get PassMeFast to book you another one—bypassing the long driving test waiting times—and get a discounted refresher course on top!