When you’re preparing to take your practical driving test, knowing the skills you’ll need to display is only one half of the story. You’ll also need to know the behaviours and actions to avoid. These are known as driving test faults.

In this guide, we’ll introduce you to the different types of fault, including those which result in an automatic fail. Once you know what not to do, you’ll be able to focus on honing your abilities and steering clear of any mishaps. Let’s take a closer look!

What is a fault? 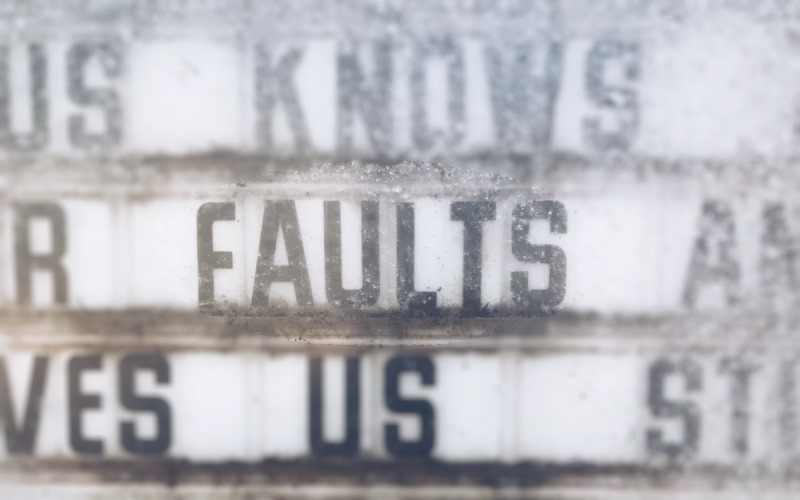 Put simply, a fault refers to any incidence where your driving abilities don’t meet the standards expected by your examiner. This can be anything from forgetting to check your mirrors before setting off through to causing a collision. Faults fall into one of the three following brackets:

The first two of these categories, dangerous and serious faults, are often informally called ‘majors’. Committing even one of these faults will result in you instantly failing your driving test. It’s therefore crucial that you avoid these.

The last category, driving faults, are often known as ‘minors’. Unlike the other categories of fault, you won’t fail for a single minor. However, if you rack up more than 15 driving faults, you’ll fail your test. Additionally, if you commit the same type of driving fault multiple times, your examiner may class this as a serious fault, resulting in a fail.

What could I get a fault for?

Though useful categories to be aware of, ‘major’ and ‘minor’ faults refer only to how dangerous your action was. What is more important to learn is what you can earn a fault for. As it turns out, however, this list is quite extensive. Take a look at the driving test app, and you’ll notice dozens of different reasons you could receive a fault! Some of the most common, though, include the following:

In fact, all of the above were amongst the top reasons why people failed their test in 2018/19. Of course, not every fault in these categories will result in a fail, but knowing where other candidates came unstuck can help to stop you from making the same mistakes. Similarly, the list above is far from exhaustive. For full details on the myriad categories you need to be aware of, take a look at our guide to the driving test mark sheet.

Do you think you were failed unfairly? Check out this advice on how to appeal a driving test!

If I make a driving test fault, will my examiner stop the test early?

To minimise the amount of time spent inside the vehicle, examiners are currently curtailing driving tests if a candidate fails partway through. This is a temporary procedure put in place as a response to the coronavirus pandemic.

We’ve now covered the consequences of racking up too many faults during your driving test. This may, however, leave you wondering: will my examiner stop my test?

The answer to this is technically a yes—but only in rare circumstances. If you fail your eyesight test, for example, your practical will end immediately. In fact, your licence will be revoked, meaning you’ll need to apply for a new provisional licence and start from square one.

Outside of this, though, candidates would need to commit extreme faults in order for the examiner to stop the test. These would include driving which poses a threat to either the occupants of your car or other road users. We’ve created a full guide to the reasons why your examiner may stop your test early—but suffice to say, these won’t apply to the vast majority of candidates. So, even if you think you have failed, just keep going!

Managed to avoid those pesky faults and get the fabled pink license? Time to get a set of wheels!

① How many minors make a major?

You can make up to 15 minor faults and still pass your test—as long as you don’t commit any major faults. A particular number of minor faults doesn’t exactly convert into a major fault, but if you rack up more than 15 of them you will fail your test.

② How many minors can you have in one category?

Despite what you may have heard, there is no clear cut rule here. This is because categories vary so much in terms of how quickly repeated minor faults can result in danger to other road users. Repeated faults within the same category indicate a habitual fault. For some categories, like junctions, this may quickly convert into a major fault. For others, it won’t. The main rule on minor faults from the DVSA is that you can make no more than 15.

③ What will cause an instant fail on a driving test?

If you commit any dangerous or serious fault, you’ll instantly fail. This means that your driving either posed a danger to other road users, the examiner, yourself, or property, or had the potential to do so.

④ What’s an example of a serious fault?

A serious fault is something that is potentially dangerous, even if it did not pose any actual danger. An example would be if you emerged very quickly into a junction without carrying out proper observations. Even if there were no other cars around, your actions would have posed a danger to others had they been there.

⑤ What are the most common driving faults?

In every year since at least 2005/06, observation on junctions has resulted in more driving test faults than any other category. Other common mistakes include failing to use mirrors correctly or to move off safely. For a more complete explanation of some of these faults, check out our guide to the top 5 reasons people failed their driving test.

⑥ Do you fail your driving test if you stall?

Stalling the car will not result in a fail, as long as it does not obstruct other drivers and you follow the correct procedure for re-starting the car. As with many things on the driving test, it all depends on the specific situation.

⑦ Is coasting a major fault?

Coasting (letting the vehicle move without the use of the engine, either by keeping the clutch depressed or staying in neutral) is not a good habit to get into. Again, there is no clear cut rule here when it comes to the test. It will be down to the examiner and the extent to which you do it. If it only happens once and is very brief, the examiner might just give you a minor. If it is repeated and leads to driving that is potentially dangerous, you can fail the test for coasting.

⑧ Can you fail your driving test based on the show me/tell me questions?

No; you’ll only pick up a minor fault if you get one or both questions wrong.

⑨ What happens if you fail a manoeuvre on the test?

Your manoeuvres do not need to be absolutely perfect. The examiner is looking for sufficient observations and good control of the car. If you feel you have over-steered or are too close to the kerb, for instance, you can start again. You will only fail based on a manoeuvre if your observations or level of control are poor enough to merit a serious fault.

⑩ How long do you have to wait for a driving test after failing?

If you do notch up more than 15 minor faults or make a major fault, you will have to wait 10 working days before taking another test.

There you have it! While it may seem like a lot to take in, these are simply the kind of things you will go over again and again with your driving instructor. By the time you take the practical test, avoiding these faults will be second nature. Stay cool, focus on the positive, and you’ll be absolutely fine!