The UK’s driving test has now been going for close to 100 years. Yep, that’s right—the driving test has been bringing learner drivers to tears and testing their mettle for nearly a century. As frustrating as it can be for learners to tackle, the roads would be a much more dangerous place without the driving test. With such a rich and long history, it’s unsurprising to find that there are some pretty interesting driving test facts and statistics that you might not be familiar with.

If you’re looking to impress your instructor or fellow learner drivers, our top 10 interesting facts and stats might do the trick—from how age affects pass rates, to how many licence holders there are in the UK, to which gender is better at the driving test. Get the full lowdown below!

1. The driving test was first introduced in 1935

The DVLA brought in compulsory testing on 1 June 1935 for all drivers and motorcyclists who had started driving on or after 1 April 1934. Before this time, pretty much anyone could start driving if they wanted—as long as they applied for a licence! According to figures from the DVLA, around 246,000 candidates applied at this time.

The first person to pass this compulsory driving test in 1935 was Mr. R. Beere—he paid 7 shillings and a sixpence to take the test, which is equivalent to 37.5p! It’s safe to say that the cost of the driving test has since increased. In fact, it will set you back £62 to book yourself a practical test. If you’ve got your sights set on an elusive weekend or evening test, however, you’re looking at a heftier price of £75! That’s not even taking into account the additional cost of booking a theory test, which comes in at £23. Bet you wish you’d taken your test all the way back in 1935 with Mr. Beere!

2. It has undergone major changes since

Though it might seem obvious to point out, the driving test has undergone huge transformations since its inception 84 years ago. Firstly, back in the day, test centres didn’t exist. Instead, learners had to meet their driving test examiners at post offices or other local landmarks.

Once in the car, learner drivers were quizzed on their knowledge of the Highway Code whilst driving—in lieu of a theory test—along with demonstrating an emergency stop, a three point turn, hand signalling and a few other key skills for around 30 minutes. Interestingly, the DVLA allowed motorcyclists to bypass the driving test entirely—they could just start driving a car as they pleased.

Nowadays, however, learner drivers have quite a few more hoops to jump through before they can get their hands on a full driving licence. For starters, learners need to pass a theory test before they can even think about booking a driving test. On the practical test itself, learners have to:

Needless to say, it’s quite the obstacle course! If that wasn’t enough change, the DVSA are to introduce a driving test app to digitally record test results.

To say that that’s a lot of driving tests would be an understatement. No wonder driving test examiners are so exhausted! According to 2017 figures from GOV.UK, there are 32.9 million licence holders in the UK. Of this number, 17.3 million are male and 15.6 million are female. Whilst the average driving test pass rate was an impressive 63% in 1935, it has since dropped to 47%.

4. You’re more likely to pass the driving test on your second attempt

Almost every learner driver looking to take the driving test goes through a bit of a panic over the prospect of failing at one time or another. Interestingly enough, however, figures from 2017/18 show us that pass rates are ever so slightly higher for learners having a second go at the test:

Wondering why your chances are better on your second attempt? It’s simple really. On your first attempt, you’re usually too preoccupied with test day nerves to fully concentrate on the test. By your second attempt, however, you know exactly what to expect—so you can put in 100%. Of course, for others, it’s mere circumstance or a fluke. Either way, it certainly makes the prospect of failing less terrifying (or embarrassing!).

5. Those located in quieter areas have higher pass rates

One factor that can impact your chances of passing the driving test is your location and subsequent test centre choice. When looking at the best and worst test centres in the UK, we found that those located in quieter, rural areas tended to have the higher pass rates—whilst those in busier, urban areas suffered from much lower pass rates.

It’s easy to see why this might be the case. If you’re having to tackle multi-lane roundabouts, tricky junctions and dual carriageways, all the while dealing with heavy and unpredictable traffic, you’re bound to bump into a few problems. If, by comparison, you’re in a much quieter area with less complex road features, you’re going to fly through your driving test.

Of course, this doesn’t mean you should take a train up to a test centre in rural Scotland just to increase your chances. Taking the practical at your local test centre will better prepare you for real-life driving once you’ve passed. If you live in a big city, you need to learn to drive there. Put in the effort and it will pay off!

6. Younger learners have a better chance of passing the driving test

Ah, the age-old debate! Whilst older drivers might have wisdom on their side, figures from the DVSA show us that younger drivers have a much better chance of passing the driving test. In fact, the pass rate for 17-year-olds stands at 55.8%, and decreases as you age. You can see this more clearly in the graph below: 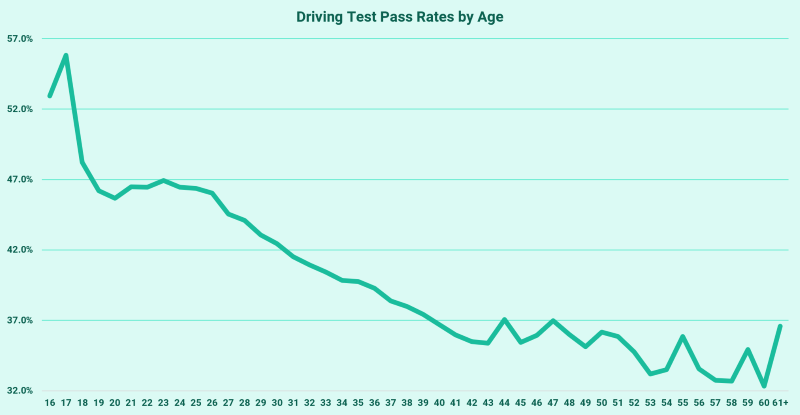 There are a variety of factors playing into this, ranging from older drivers showing too much caution in the test, to confidence dwindling with age, to the actual effects of ageing putting older drivers at a disadvantage. You can read more about this in our article on driving test pass rates by age. Of course, that’s not  to say that older drivers are doomed. You shouldn’t let age put you off driving! As long as you put in the hours and listen to what your DVSA-approved instructor tells you, you’ll have a full driving licence in your hands in no time!

7. Men are better at passing the driving test

Nothing gets the debates started as much as the battle of the sexes. Well, when it comes to the driving test, male learner drivers boast much higher pass rates than their female counterparts—coming in at 50.40% compared to 43.10%. This wide gulf was evident even when we looked at when the best time of year to take the driving test was. Interestingly, the gap does start to shrink slightly as the attempt number increases. 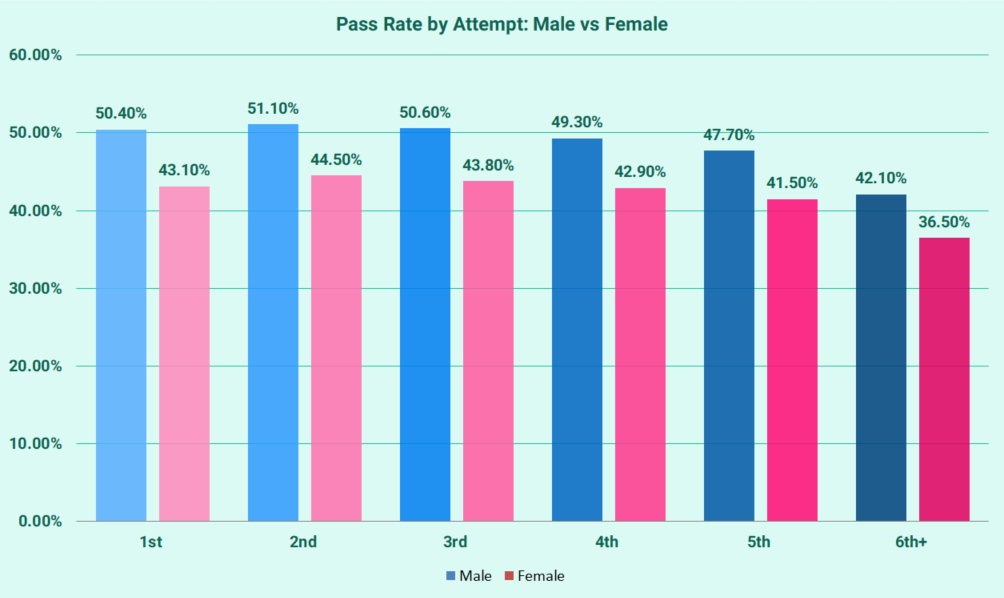 When it comes to the theory test, however, women reign supreme—they also tend to be the safest drivers on the road. We wouldn’t put too much stock into pass rates, though. It’s all down to your personal effort on the day after all!

One of the biggest decisions that learner drivers have to make when learning to drive is picking either manual or automatic transmission. More and more learners nowadays are opting for automatic licences, in the hopes that not having to deal with gears will increase their chances of passing. In fact, manual tests fell by 2.5% from 2007/08 to 2017/18, whereas automatic tests rose by a whopping 133%!

Interestingly enough, however, despite learner drivers assuming that automatic cars are easier to learn in, pass rates are not higher for automatic tests. Looking at manual and automatic pass rates in 2017/18, we found that the manual pass rate came in at 47.1%, whilst those testing their mettle in an automatic car had a much lower pass rate of 38.9%. This could be due to learners presuming that their problems with picking up driving skills is due to a difficulty with changing gears, as opposed to other inadequacies. Of course, without any evidence, who can say?

9. Observations at junctions are the biggest roadblock for learner drivers

When it comes to the driving test, there are countless factors that lead to learner drivers racking up driving test faults and, ultimately, failing their driving test—from speeding, to bad road positioning, to ignoring pedestrian crossings. What appears to be kryptonite for most learner drivers, however, are observations at junctions. In fact, according to a report from the DVSA, this has been the number one reason for learners failing their test for 10 years! Want to avoid falling prey to this pesky area? Read up on our article exploring why so many people get observations at junctions wrong.

Other common reasons for learners failing their driving test include:

10. Hundreds of thousands of copies of the Highway Code are sold every year 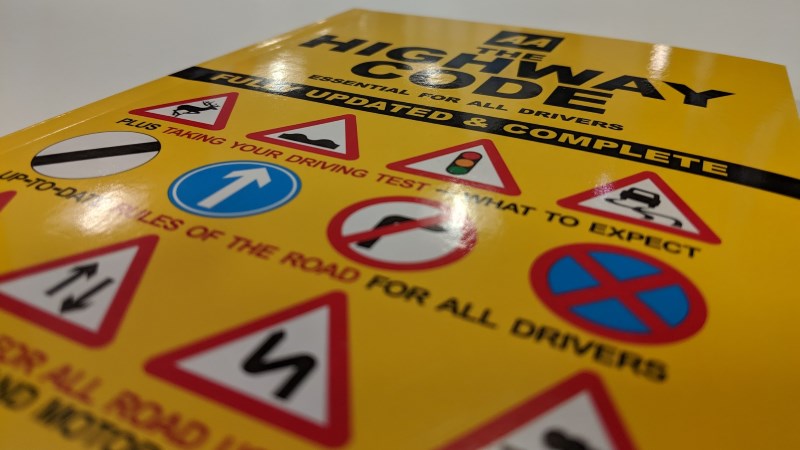 Without the Highway Code, it wouldn’t be an overstatement to say that the UK roads would be utter chaos. The history of the Highway Code, a compilation of the rules and regulations of the road, goes all the way back to 1931! As any learner and qualified driver knows, the Highway Code is essentially the backbone of the theory and practical test—essential knowledge for anyone on the UK roads. In fact, you probably wouldn’t be able to pass either test without glancing through a copy first, which is undoubtedly why, according to the DVSA, “it never leaves the bestseller lists.”

And there you have it! You now have 10 interesting driving test facts to share with your friends, family and fellow learner drivers. If you’d like to read more about the driving test, keep an eye on the PassMeFast blog for the latest articles, guides and statistics!