When the DVSA announced the reopening of the driving test booking service late last week, learners around the UK rejoiced. Finally, this was their chance to get on the road after many long months in lockdown. As is so often the case, however, the expectation fell far short of the reality, leaving learners incensed. With two botched attempts at reopening the system now behind us, we take a look at what went wrong for the DVSA in the last week.

It was just a few short days ago that we reported on the reopening of the test booking system. It’s no wonder plenty of learners were excited by this news: the general public hadn’t been able to book driving tests since March, so plenty had been waiting months for this moment.

Unfortunately, the DVSA had apparently failed to foresee the huge increase in demand for driving tests. So, when the booking system reopened on Friday morning, learners experienced a site that was slow at best, and completely inaccessible for many.

I have been trying to book my driving test SINCE 11AM ??? #drivingtests pic.twitter.com/wfXYaM3WYF

Over 13 hours of been gaslighted by the DVSA driving test booking system. @DVSAgovuk don’t insult your service users and waste their time, implement a queuing system. You’ve have months to plan and predict the backlog of requests in one day. @DVSA_HelpMe pic.twitter.com/JQr3dS1Exr

driving test is booked n I’ve never been so happy after 12 damn hours of trying pic.twitter.com/ICuQwt6qcf

…others had a much more frustrating experience.

I’ve been trying to book a driving test all day and the website keeps crashing. Got to the payment page three times and then apparently I “went and came back again”? Definitely needs sorting as it’s doing my head in!

Astonishingly, it seemed that there had been no changes at all to the normal booking system, with the DVSA simply relaunching and hoping for the best. This left plenty of people wondering how they’d got it so wrong with ample time to prepare.

#drivingtest
DVSA: *Book a driving test*
Note: This service is available from 6am to 11:40pm

Me: Oh great! I’m presuming you’re using that downtime to increase the server capacity, right? Y’know, the thing you’ve had 6 months to do?

With little choice, the DVSA made the decision to close the booking service once again, promising to reopen it at 8am on August 26th. Some on Twitter had suggestions…

How difficult is it to book a driving test, been trying all day, still get a 504. The government is a shambles, even the zoos can do a queuing system why can’t they ?

…and by this week, it seemed the DVSA had finally taken that advice on board.

Implementing a queuing system was always going to cause at least some consternation, with the prospect of some candidates being locked out.

However, competition became even fiercer when the DVSA announced that they would only be releasing the next six weeks’ worth of tests. This was done to ensure that the DVSA could “react quickly to any changes in government guidance about coronavirus”. In addition, the number of tests taking place during that period was set to be far lower than normal, accounting for less examiner availability, COVID-19 safety restrictions, and ongoing key worker tests.

All in all, this left just 35,675 tests available over a six week period. This would already have likely been too low a figure for normal times, but now, it was simply far too small to meet the pent-up demand. Numbers in the queue soon soared, with over a quarter of a million waiting at certain points:

The DVSA driving test online booking system is up and running again – but right now there are 250,590 in the queue

For those learners who did, by some miracle, manage to get into the booking system itself, the situation was often dire. Many were left with screens like this: 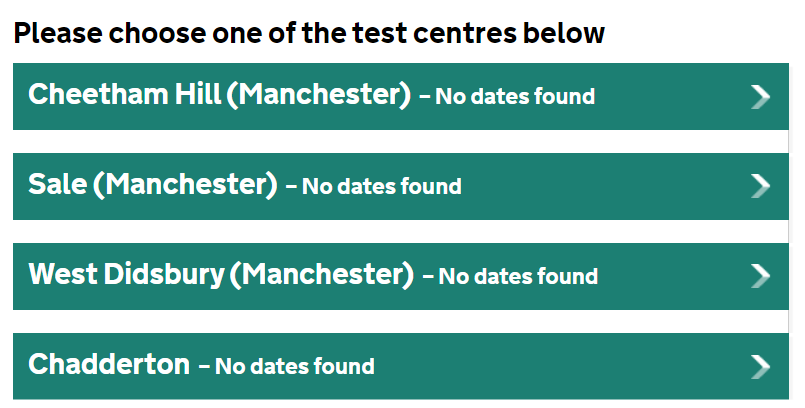 Appointments were snapped up so quickly that the DVSA ended up releasing a breakdown of which test centres had availability left. The vast majority were listed as having either “very limited availability”, with less than 5% of tests remaining, or none at all. This led to plenty of moments like this:

After waiting since 8.19 to get through they now say there is no available tests in my area although the list states there’s very limited availability thanks for wasting another 5hrs of my time!! #dvsa #drivingtest #sortitout pic.twitter.com/yF3P299GmM

And, worse still, many who simply never got to the end of the queue.

So Son No 1 tried to rebook Driving Test that was cancelled due to Covid. 35000 tests released at 8.30, he joined the queue at position 106245! At 5.40 this happens! #drivingtest #dvla #AnotherCovidConsequence #UtterShambles @DVSAgovuk Do better next time! pic.twitter.com/F6ppieL3ez

…it’s fair to say that this was a day that left most hopeful drivers feeling angry, confused and even more impatient to get on the road.

If you don’t like the idea of spending your time glued to a miles-long virtual queue, then PassMeFast could offer you a solution. That’s because, when you book a practical test with us, we’ll do the hard work for you!