The last year has been a bit rubbish (okay, a lot rubbish) for learner drivers. Lockdown prevented lessons and tests for months and when test centres finally reopened, the demand has been so high that many people still haven’t got their licence.

But, it’s not all doom, gloom and misery — there’s a faint light at the end of this tunnel. The DVSA has released the first test stats of 2021 (Q4 of the financial year 2020–21), so let’s see what they’re saying… They might just give you a nice dose of hope! 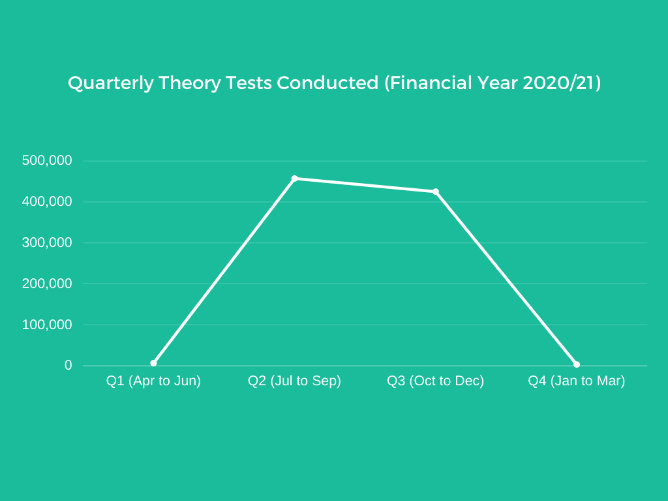 With a cliff-edge drop of nearly half a million tests, it’s becoming easy to understand why the UK now has such a massive backlog of learners.

The summer of 2020 saw some easing of restrictions — test centres reopened, many with extended opening hours to plough through the backlog. In Q2 (July–September 2020) of the financial year, the DVSA conducted 457,177 theory tests. Although this is a huge improvement on Q1, the number of tests completed is still lower than Q2 of the year before.

Unfortunately for everyone, the backlog continued to grow.

Q3 (October–December 2020) brought us more of the same, although the number of tests taken—424,859—dipped when compared to Q2. This is probably down to general sickness during the winter months and the rise in covid cases. With everybody on the highest of high alerts, many test centres were temporarily closed after staff were ordered to isolate by track-and-trace.

And so, (you guessed it) the backlog grew again… But, ‘New Year, new beginnings’, right?

Erm, maybe not this time. Q4 (January–March 2021) served up even more problems for Britain’s learner drivers as we went into another national lockdown. During these 3 months, a measly 2,874 theories went ahead. So, if you managed to sit one of those, consider yourself very lucky!

Now we’ve got the bad news out of the way — let’s have a happiness hit and chat about some good news!

Even though far fewer tests were allowed to go ahead in 2020/21 compared to 2019/20, we saw an uptick in the number of passes. This is often the case with practical tests (as we’ll cover shortly), but it’s quite surprising to see theory results rise in the same way.

Let’s read between the lines: 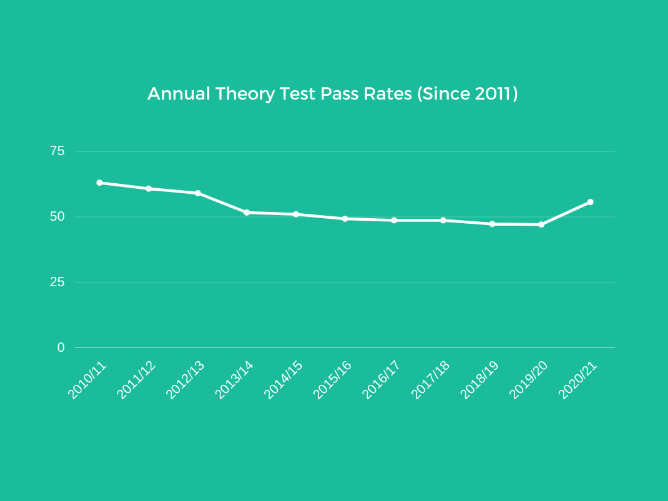 It’s clear from this graph that the theory test has gotten harder over the past decade. This is to be expected — the DVSA refreshes the test regularly and sometimes outright say they’re making things harder for learners (thanks for that, Deevs…). We’ll have to cut them some slack, though — theory is an important part of learning to drive and can have a direct impact on the amount of accidents on our roads.

Pass rates in 2021 are up 8.6% when compared to 2020, so one thing must be said for the backlog — it seems to encourage learners to revise even harder to avoid waiting for a resit!

Ah, the good ol’ practical test. It’s been striking fear into learner drivers for close to 100 years, but we’ll just look at the last 10 today.

As you can see from the graph below, practical tests have followed a very similar pattern to the theory over the last year — peaking in summer when restrictions were lifted, but having huge dips in Q1 and Q4. 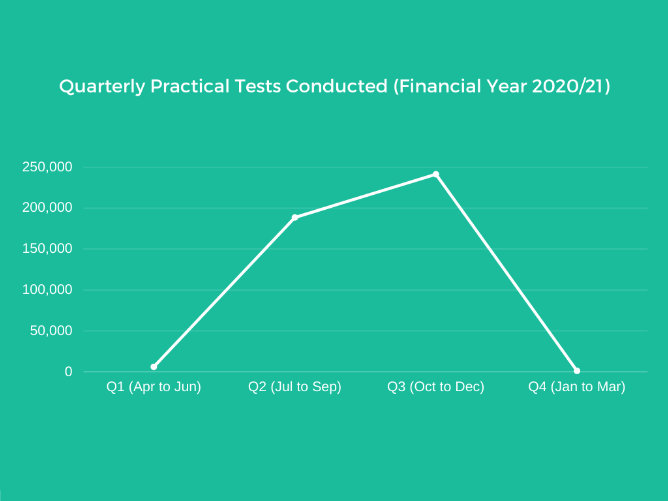 In Q1, the DVSA only allowed 6,264 practical tests to go ahead in 3 whole months. These few thousand people will all be key workers who applied for emergency testing, with most of these being emergency services and medical workers. It’s easy to understand why the DVSA gave tests to these people, especially given the fact we were slipping into a global pandemic… In Q1 of 2019/2020, there were 393,428 practical tests completed.

So if anybody ever asks how badly the UK was affected by coronavirus, just show them that statistic!

Life (slowly) returned to (slight) normality in the Summer of 2020, when 188,520 tests were conducted. This falls wayyyy short of the 407,671 tests that Summer ’19 hosted, but a giant improvement on Q1’s six thousand-odd tests.

Q3 brought further improvements on the figures, with 241,260 learners sitting their test. Still not enough, though, as every Q3 for the last 5 years had at least 400,000 tests. This suggests most test centres were running at half capacity, again adding to the backlog of learners.

And then disaster struck in Q4 — Great Britain entered another lockdown. The majority (if not all) of the 1,308 tests carried out in this period will be emergency tests for key workers and centres didn’t reopen their doors to the public until April 2021.

How many people passed their practical test in 2020/21?

Let’s have a quick gander at the numbers all learners focus on — the pass rates. There is some good news to be found here, too! 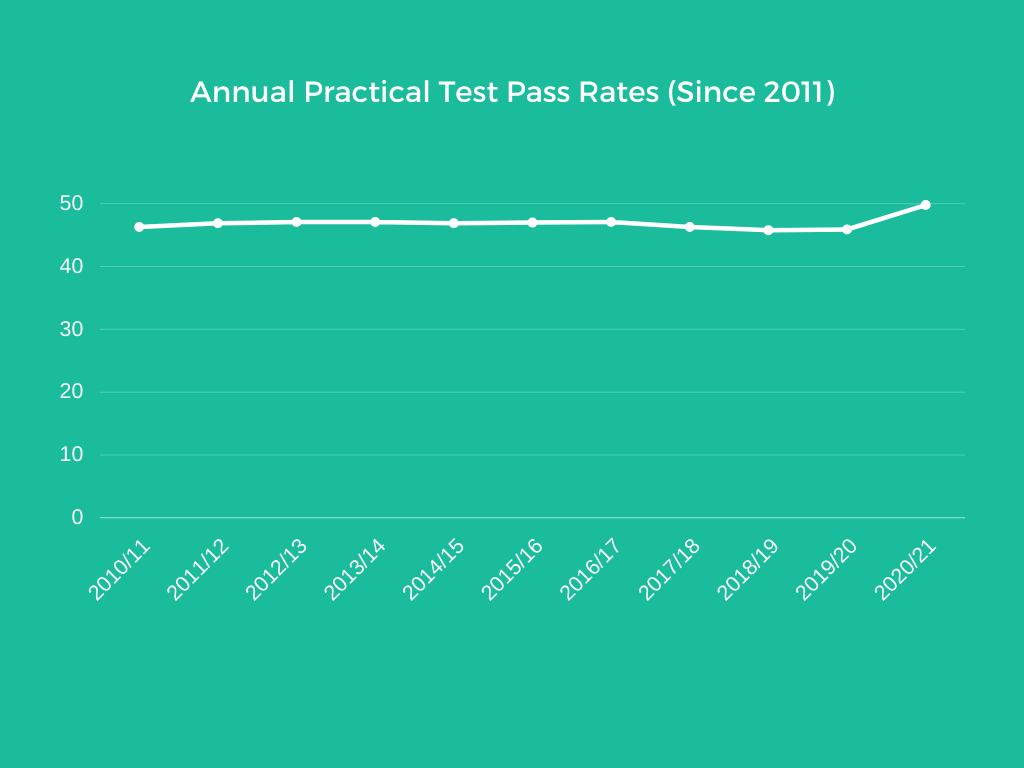 Practical test rates, unlike the theory rates we covered earlier, have plateaued in recent years — mainly because the format of practical tests hasn’t changed as much as theory tests have. There is an anomaly though, and that’s 2020/21 where we saw pass rates jump to 49.8% from 45.9% in 2019/20.

Now this is good news for anyone planning on learning to drive soon, but why exactly has the pass rate risen?

We wonder if the rise in passes could be down to the roads being quieter while people continue to WFH. Maybe test examiners are giving a little more lee-way thanks for the backlog of half a million tests hanging over them? Or perhaps it’s just the steely determination of learners, giving that extra 1% out of fear of waiting another 18 months for a practical test?

We’ll never know for sure, but one thing we know is that pass rates saw the most significant rise in over a decade, jumping up by 3.9%.

Phew — that was a lot of numbers! I hope this helped you understand how and why the pass rates have changed during one of the strangest times in modern history.

There is a hefty backlog (I’m not sure if I mentioned in the article… 👀) but you’ve come to the right place.

We are intensive course connoisseurs who specialise in helping you pass your driving tests fast — backlog or not. Take a look at our courses and book today to take the faster route to driving. Who knows? You might be one of the passes included in next years edition of the stats!