Hello readers! We’ve reached the end of a rather turbulent month, where wind and rain have lashed the UK. There’s been so much going on with the weather that you may have missed some of the month’s top stories! Luckily, the PassMeFast team are here with our February news roundup.

This month, we’ll begin by taking a look at the upcoming theory test changes, before moving onto the planned ban on petrol and diesel cars. After that, we’ll report on the miraculous escape two families had when their automatic brakes saved them from a falling tree. To finish, we’ll talk about our latest county launches, and introduce our (topical!) Highway Code tip of the month.

On April 14th, the DVSA announced the postponement of the theory test changes detailed below due to the coronavirus pandemic.

Here at PassMeFast, helping learners to get on the road is our business. That’s why we had to kick off this month’s roundup with the news that, on April 14th, theory tests are changing.

At present, candidates taking the test need to read a case study and answer 5 multiple choice questions. This enables you to show that you can apply the rules of the road to real-life situations. From April 14th, however, the DVSA will drop the written case study in favour of a CGI clip.

The new clip will show a short driving scenario, similar to those seen in the hazard perception test. Instead of clicking when you see a hazard, however, you’ll need to study the clip carefully. After you’ve watched it, you’ll then have to answer three multiple choice questions about it. You can watch the clips as many times as you like.

The aim of the change is to make the test more accessible to those with conditions such as dyslexia and autism. For the time being, the change will affect only car theory tests; there will be no impact to tests for other vehicles. There will be no change to the other sections of the test, including the hazard perception section. For full information, visit our article covering the theory test changes.

Of course, this is far from the first time the DVSA have tweaked the theory test. The case studies set to be dropped were themselves a relatively recent addition, having been introduced in 2009. Meanwhile, CGI clips replaced old filmed clips in the hazard perception section from 2015. Take a look at the full timeline by reading our guide to the history of the theory test.

Cast your mind back to the summer of 2017, when the government announced that petrol and diesel cars were to be banned from 2040. At the time, this garnered a mixed reaction, with some environmental groups claiming the move didn’t go far enough.

Now, however, the government have unveiled a more ambitious target. On February 4th, the Prime Minister unveiled plans to bring the ban forward by 5 years—at a minimum. This means that sales of new petrol and diesel cars will end in 2035 at the latest.

The announcement came at a launch event for COP26, a climate conference that will take place in Glasgow later this year. The event was also attended by Sir David Attenborough, who called the government’s commitment to greater action against climate change ‘encouraging’.

Later, in an interview with BBC Radio 5 live, Transport Secretary Grant Shapps hinted that the ban could come as early as 2032. However, trade body SMMT reacted negatively to the move, accusing the government of ‘[moving] the goalposts’ and failing to provide clarity. We’ll continue to follow this story as it develops in the coming months.

UPDATE: Since this article was published, the ban on petrol and diesel cars has been brought forward to 2030. Read our November 2020 news roundup for more details.

One of the month’s most dramatic stories came, unsurprisingly, in the wake of Storm Dennis. With strong gusts causing nationwide damage, it was a dangerous time for drivers to be out on the road. In Dorset, however, two families were kept safe thanks to their cars’ braking system.

In the astonishing incident, the Sanderson family were travelling along the A31 in their Tesla Model X when Storm Dennis felled a 400-year-old oak tree. The tree came crashing down too quickly for the driver, dad Laurence, to react—but luckily, the car’s automatic emergency brake kicked in. This meant that the tree hit the car’s bonnet rather than the roof, meaning everyone inside came to no harm.

This story would have been astounding enough on its own. As fate would have it, though, another family were travelling along the road in the opposite direction at the same time. Extraordinarily, they were driving the same model—and their car braked automatically too. While both cars were written off, the system managed to save no fewer than eight lives. No wonder Elon Musk himself took the time to reply!

PassMeFast launches in Buckinghamshire and Hampshire 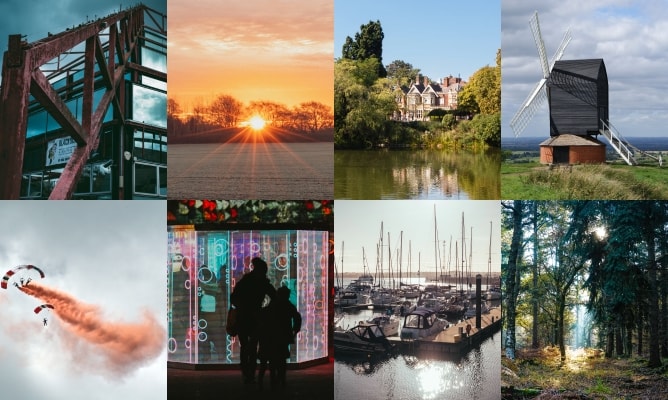 We’ve saved the best for last in this month’s roundup. Yep, we couldn’t miss just one more chance to shout about our recent launch in Buckinghamshire and Hampshire!

Just in case you missed the big news, our courses became available in Buckinghamshire and Hampshire on February 1st. This opened up our courses to over two million more people! Not quite sure about the exact areas we cover yet? Check out local information by following the links below.

Don’t worry if you don’t see your town in the list—we cover the whole of both counties. This means that you can book any of our range of intensive and semi-intensive courses, no matter which part of Buckinghamshire or Hampshire you live in. So, why wait? Get things started by booking your course now.

With the arrival of both Storms Ciara and Dennis, February has certainly been an unsettled month. In fact, both were amongst the strongest storms of their kind in history! With this in mind, it’s only fitting that this month’s Highway Code tip focuses on windy weather.

We’ll be focusing here on rules 232 and 233 of the Highway Code. The first of these reminds drivers that strong gusts can blow vehicles off course, with high-sided vehicles most commonly affected. It’s also worth remembering that vulnerable road users, such as cyclists and motorcyclists, could be blown into your path in high winds. For this reason, it’s a good idea to check out the advice for driving around cyclists.

Rule 232 also covers when high winds are most likely to affect your drive. You’re more likely to be vulnerable to gusts if driving:

Meanwhile, rule 233 reminds motorists that it’s not just the wind itself you need to be cautious of. In windy conditions, high-sided vehicles can be affected to the point where they create additional turbulence. This can affect other vehicles on the road—particularly motorcyclists. As such, if a motorcyclist is attempting to overtake a high-sided vehicle, stay well back.

That completes our February news roundup! Don’t worry if you still need a pick-me-up, though. We’ve got top pass photos and customer reviews for you to check out, too! As always, stay tuned to PassMeFast for all the latest news as it happens.