Howdy there, readers! We’ve reached the end of another month, and have already seen one third of 2021 fly by. Where does the time go?! In the world of motoring, this has been a particularly exciting month. With lockdown coming to an end, we can finally look forward to getting on the road and travelling the length and breadth of Great Britain again. A summer of road trips? Count us in!

Of course, as well as looking forward to what’s to come, we’re taking time to look back on the month that’s just been. Firstly, there’s the biggest story of the month: the resumption of driving lessons across the UK. That’s not all, though: we’ll also take you through Google Maps’ new eco-friendly directions, the latest update on smart motorway safety, and shocking stats about young drivers. Let’s go!

Driving lessons and tests are back 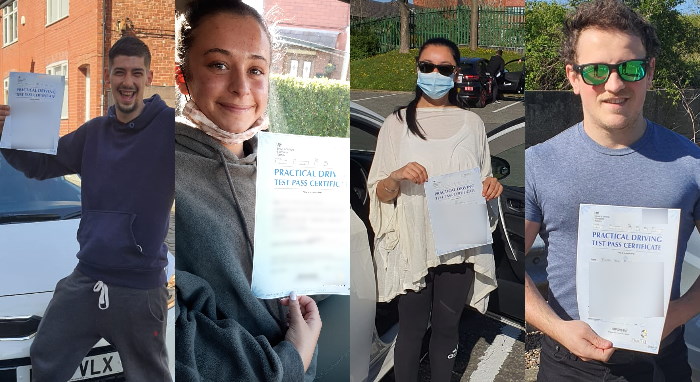 It’s no secret that our team’s favourite thing is seeing learners pass their driving test. Indeed, under normal circumstances, we regularly see hundreds of students pass each month. However, the restrictions imposed across the UK in recent months have seen the flow of pass photos slow to a trickle. This month, though, everything changed. The lifting of lockdown has seen driving tuition make a roaring comeback across the country, with learners getting on the road for the first time since January.

England and Wales kicked things off by restarting driving lessons and theory tests on April 12th. Ten days later, practical tests came back in these countries as well. Northern Ireland got in on the action on April 23rd, while Scottish learners started taking driving lessons again from April 26th. Scotland remains the only part of the UK where tests are still suspended—though not for long, as they’re set to come back here on May 6th.

Right from the off, we saw our learners proving that lockdown didn’t dull their skills. In fact, we came back with a bang with plenty of passes on the very first day! If you’re hoping to get your licence, then a PassMeFast course could be exactly what you’re looking for. With fast-tracked tests, we provide a faster route to driving for our learners. Check out our full range of courses here!

When going from A to B, having the route planned out for you can make life a lot easier. With this in mind, it’s no wonder that satellite navigation has become an every day part of driving. As well as dedicated sat navs, many of us turn to the one device that does pretty much everything: our phone. And amongst smartphone mapping apps, Google Maps is the undisputed king.

If you’re familiar with the app, you’ll know that the directions it gives you can adapt in real time to conditions on the road, and that you’ll be able to choose certain options, such as avoiding toll roads. However, as part of a drive to become a carbon-free business, Google announced this month that it would start prioritising eco-friendliness in the directions it gives to drivers.

When drivers put in their destination, Google Maps will attempt to calculate if there’s an eco-friendly route with around the same arrival time as the fastest option. If there’s one available, then it will present the driver with the greener version. In the event that a low-carbon route would take significantly longer, then the driver would be able to choose between this or a faster option. Drivers can also opt to shut off the feature altogether.

This isn’t the only new feature with an environmental theme. Google Maps will also start alerting users when they’re about to enter a low emission zone, such as London’s ULEZ. Drivers will be able to find out instantly if their vehicle meets the requirements, and alternative routes will be made available.

SVD to be implemented across smart motorways

There was once a time when public opinion of smart motorways was relatively positive. In a 2016 survey, 41% of UK drivers supported the creation of more such roads, with just 39% against and 20% unsure. Since then, high-profile deaths on smart motorways have caused views to shift dramatically. Now, around 57% of the public oppose their use, with just 25% in support. Meanwhile, 64% see them as less safe than normal motorways, with only 7% believing them to be safer.

With smart motorways under greater scrutiny than ever, the Government has announced that stopped vehicle detection (SVD) technology will be rolled out earlier across all stretches of all-lane running (ALR) motorway. Originally planned for March 2023, SVD will now be in place on all ALR smart motorways by September 2022. Additionally, no new smart motorways will open without SVD technology.

The system aims to improve safety on the roads through rapid detection of any stationary vehicles. SVD should be able to detect this within 20 seconds of a vehicle stopping, meaning that control room operators will be aware of any problems much earlier. It remains to be seen whether the new measures will allay the fears of those who want smart motorways scrapped altogether.

Record low numbers of 16–25-year-olds have a licence

Driving has long been seen as a rite of passage for young adults. However, new data from the DVLA suggests that the COVID-19 pandemic has slammed the brakes on their driving dreams. That’s because there are now fewer 16–25-year-olds with a full UK licence than at any point on record.

There are now 2.97 million full licence holders between the ages of 16 and 25 in the UK. That’s a sharp decrease from the figures just one year earlier, when there were 3.32 million in the same age bracket. This suggests that the large number of tests cancelled due to COVID-19 has prevented new young drivers from gaining their licence, shrinking the overall pool.

There is reason to hope that the trend will soon reverse. We know that there is a backlog of around 420,000 driving tests due to successive national lockdowns—a figure that’s close to the drop in young drivers. As driving schools such as PassMeFast start helping to get learners passed again, we can expect plenty of new motorists on the road in the months ahead.

That’s our April roundup! Don’t forget that the PassMeFast Blog is your one-stop-shop for all things driving all year round. So, don’t miss the next big story—subscribe to notifications and get the latest!