If months of lockdown have left you yearning for the open road, then you’re not alone. Since March, theory and practical tests have been suspended for most learners. Fortunately, though, that’s soon set to change, with testing set to resume within just weeks! So, what better time then for a dose of driving inspo? Yep, right on cue, the DVSA have announced the pass rates for 2019/20! Let’s take a look and see how last year’s learners got on with the theory and practical tests—as well as checking out the figures for ADIs!

Back in September, when we examined at the very first figures from 2019/20, we saw some promising stats when it came to the theory test. More candidates than the previous year were taking the test, and it looked as if we could approach record numbers. So, how did the reality bear out?

There was certainly a healthy increase in the number of theory tests taken in Great Britain, with over 1.8 million tests taken in all. However, the year didn’t quite enter the record books, with numbers tailing off in Jan–Mar 2020, likely as a result of the coronavirus pandemic.

So, we know that more people took the theory test this year… but how many managed to pass it? Well, let’s start with the good news: there were 878,903 theory test passes this year! However, it does mean that the theory test pass rate has fallen once more—the chart below demonstrates how the figures have tumbled over the last decade.

Fortunately, the decline was only fractional this year, with the pass rate down from 47.3% to 47.1%. This gives us hope that the long-term decline in theory test pass rates is slowing down. This doesn’t mean the end of theory test travails, though: with further theory test changes likely to be implemented in future, it’s possible that this trend could change yet again. 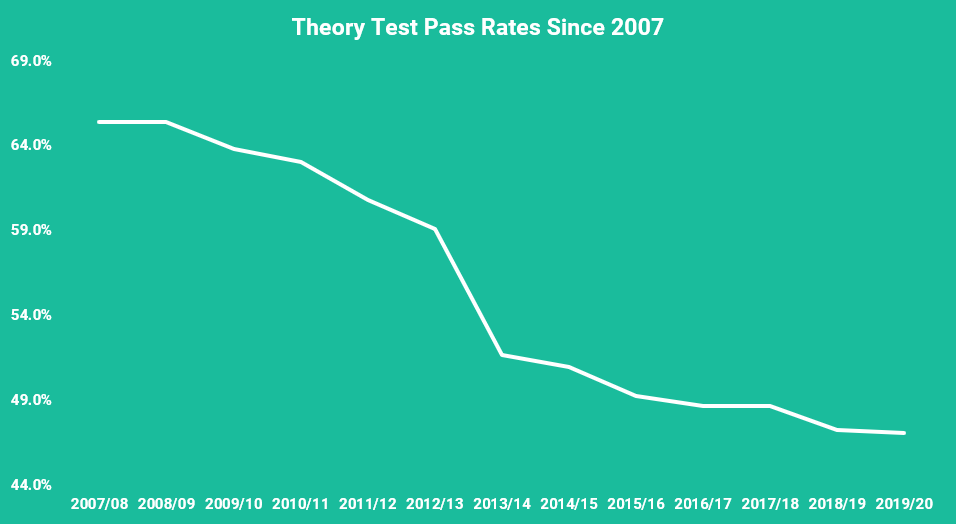 Compared to the downward slope theory tests have been sliding in recent years, practical test figures have remained fairly stable. In fact, since 2008/09, they’ve stayed within the same narrow range between 45.3% and 47.1%. So, how did things look this year?

In a mirror image of the theory test results, there was a slight increase in practical test pass rates. We should emphasise, however, that it really was slight: up from 45.8% to 45.9%. Nonetheless, it will certainly have come as good news for the 734,600 candidates who passed their test and obtained their licence this year! Take a look at the chart below to see how this year fit into the long-term trend. 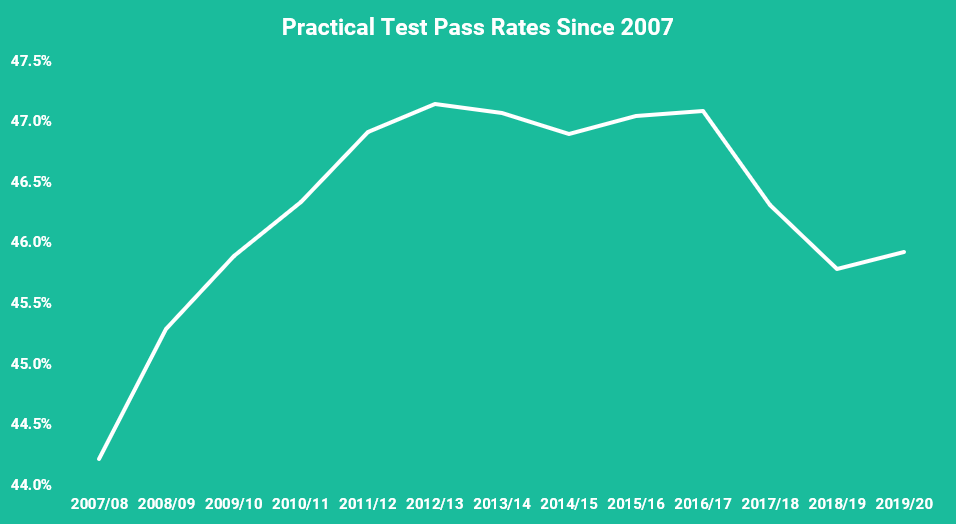 Want to find out which areas performed best (and worst)? Take a look at the top and bottom ten test centres in 2019/20.

At PassMeFast, we know that no driving test success story would be complete without instructors. Nonetheless, the achievement of becoming a driving instructor is all too often uncelebrated. This is disappointing, since—as anyone who’s familiar with the process knows—becoming a driving instructor is no mean feat. Not only do you have to pass the standard theory and practical tests to get your licence, but there’s an additional three tests on top of that that you’ll need to pass in order to get your ADI badge.

The first of these tests is a theory test. Unfortunately, no statistics are released for this test, meaning it’s not possible to say how candidates perform here. We can, however, reveal how potential driving instructors performed on the other two tests: part 2, a rigorous test of a driver’s practical ability, and part 3, which tests your skills as an instructor. Let’s see how candidates performed: 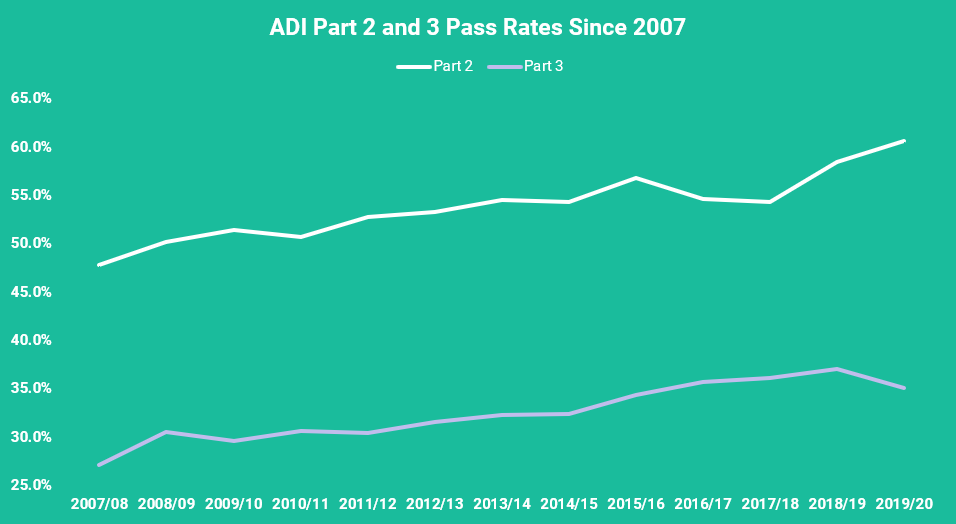 This year saw part 2 pass rates hit record highs, exceeding 60% for the first time ever. In raw numbers, 3,628 of the 5,983 candidates who sat this test passed it. Good news for them, as you only get three shots at this test!

Part 3, however, has long been regarded as the toughest obstacle on the road to becoming an instructor. After all, being a good driver is one thing—it takes a special set of skills to be able to impart that knowledge to others. Pass rates here have remained stubbornly low, with 2018/19 seeing a record of just 37.1%. This year, there was a slight drop back from that number, with 35.1% of those who took the test in 2019/20 making the cut.

We hope these stats have got you in the mood to get on the road—and with practical tests set to restart in just a matter of weeks, it won’t be long until you can get your hands on your very own pass certificate! So, if you’re interested in joining the thousands of learners who pass every year, be sure to book with PassMeFast. Our range of intensive courses take the stress out of getting on the road. With us, you do the driving—we do the rest!