There’s no doubt that learning to drive is one of the most important life skills you’ll ever gain. Nonetheless, it’s also true that the process of getting your licence comes with costs. However, while theory and practical test prices are the same across the country, driving lesson rates can vary wildly. Check out our infographic below with some of the key facts. After that, we’ll take a look at some of the reasons behind the variation, and show you how much driving lessons cost on average where you live.

Before we dive into the ways in which driving lesson rates differ, it’s good to establish what instructors charge on average. Information on this can often be somewhat patchy, with some sites giving a broad guideline of “between £20 and £30 per hour”, for example. That’s why we here at PassMeFast surveyed over 1,000 ADIs in 18 counties across the country to create a clearer picture of what students can really expect to pay.

We found that the average driving lesson rate amongst the instructors we spoke to was £26.01. There was plenty of variation, though, with some ADIs charging as little as £15 per hour or as much as £42. We’ve compiled the full set of data into the chart below. 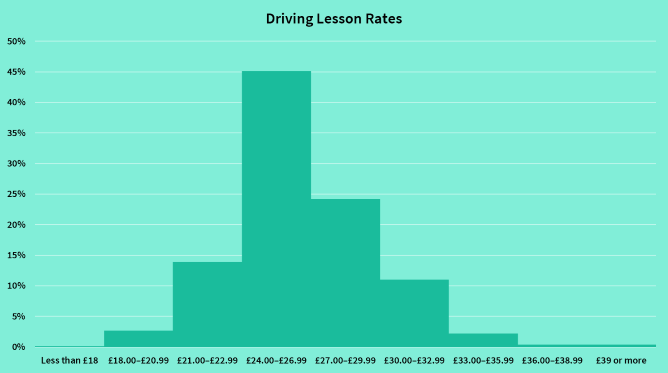 Very few instructors went below the £20 mark, with just 0.4% of instructors offering rates between £15 and £19.99. On the pricier end of the scale, around 14% of instructors charged £30 or more. It’s worth noting, though, that most of those charge exactly £30, with only 4.5% going above this price point.

If you’re familiar with any of the statistics surrounding learning to drive, you’ll be aware that regional variation is very common. As it so happens, this pattern holds true when it comes to driving lesson rates. So, how does the picture look where you live? Take a look below and compare prices in each of the eighteen counties where we surveyed ADIs. 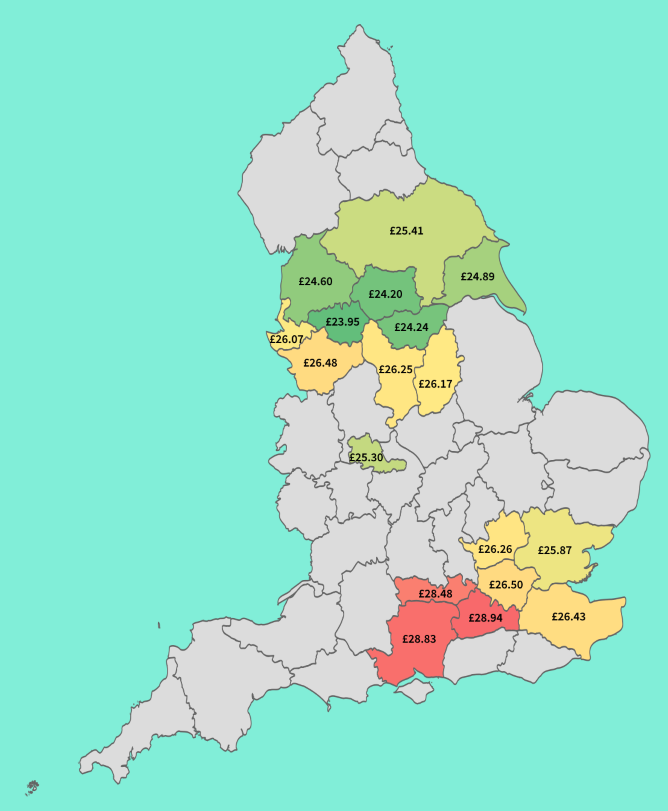 Of the counties, most fall somewhere close to the national average. Indeed, 10 of the 18 counties have driving lesson rates within £1 of that £26.01 average. Merseyside is the county with the most ‘average’ rates, just 6p off the nationwide figure. (Interestingly, when we compared driving test pass rates by area, Merseyside’s St Helens test centre was closest to the average!)

The counties at the extremes may not come as too much of a shock to some readers. To begin, our top three is a cluster of urban counties in northern England. Greater Manchester had the cheapest average rates, at £23.95, followed by West and South Yorkshire. Meanwhile, leafy Surrey‘s rates of £28.94 were the most expensive in the nation, followed closely by neighbouring Hampshire and Berkshire.

London‘s learners, meanwhile, may have better news than they expected. That’s because, while driving lesson rates in the capital are above the national average, the difference isn’t too great. In fact, rates in Greater London are closer to those in Cheshire and Derbyshire than its neighbours to the south-west!

Why do driving lesson rates vary? 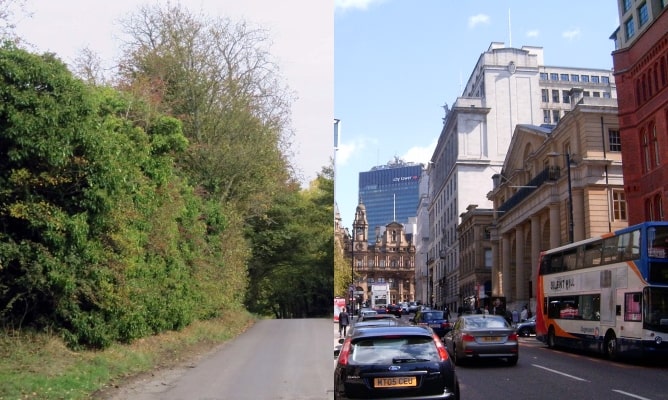 We now know the what and the where of driving lesson rate variation—but we haven’t yet addressed the why.

The first is quite simple: instructors can charge what they like. As a result, natural fluctuations easily come into the market. This is particularly likely in areas with few instructors, where little competition means prices may remain higher. Additionally, in areas where prices are already high, there’s little incentive to undercut the market by too much.

A related issue is the rural-urban divide. In sparsely populated parts of the country, there’s likely to be little competition, and students may only have one or two options to turn to for driving lessons. Urban areas, meanwhile, are likely to have more ADIs. We examined this for our article on which parts of the country have the most instructors. There, we found that the areas with the most instructors in both numerical and density terms were urban areas.

This stat also works in reverse. If you’re an instructor covering a predominantly rural area, you’ll have to cover more ground to get as many pupils. This means driving further, which in turn pushes up your fuel costs—something which needs to be offset by higher driving lesson rates. A city-dwelling instructor, however, may be able to find all the pupils they need in a few square miles. Pupils can then benefit from greater choice and lower rates.

As a final point, manual and automatic learners can expect to pay different driving lesson rates. Manual lessons are, it seems, far more common. In fact, of the ADIs we asked, around nine times more teach in manual than automatic cars. Given their rarity, then, it’s not surprising to see that automatic lessons are dearer. On average, auto lessons cost £27.76, while manual rates stand at £25.81.

How can I get more for my money? 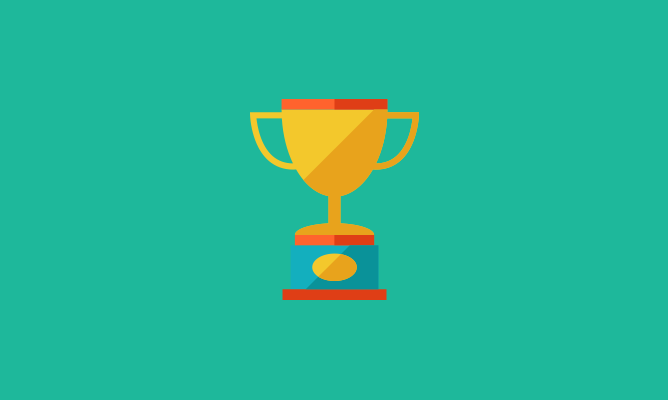 Aside from upping sticks for the big city, there are still plenty of ways you can make learning to drive more cost-effective. Here are our top tips.

Automatic cars are gaining in popularity here in the UK—but they remain a more expensive option than manual cars. Their higher purchase prices, fuel usage and maintenance costs means automatic instructors can expect higher overheads. Learning in an auto can, therefore, be pretty pricey. Getting behind the wheel of a manual is often a cheaper choice here. As an added benefit, you’ll be able to drive either a manual or an automatic after passing—while those with an automatic licence can’t change transmission later on.

Instructors in the very same area may offer driving lesson rates that differ by more than £10 an hour. Given that a typical learner needs around 47 hours of practice to become ready for their driving test, this can result in savings of hundreds of pounds if you choose right!

Traditional lessons typically involve driving for only around one hour per week. As you can imagine, this means lots of time spent retreading the same ground—and the pace of learning can be slow. An intensive course, meanwhile, concentrates your learning into a shorter period of time. This means you can focus on learning new skills and constantly refreshing your knowledge.

A PassMeFast course offers drivers the chance to speed up their learning and design a course that suits them. With both intensive and semi-intensive courses available, you can gain the experience you need to become test-ready in weeks, not months—even on a busy schedule. What’s more, we’ll schedule your fast-track practical test to take place at the end of your course hours. This means no waiting around and no need for further refresher lessons: once you’re ready to take the test, you’ll be straight in there!

If you’re interested in finding out more, check out all of our courses by visiting our prices page. You can also try our course recommender, which reveals your ideal course using just a few simple questions!