Since 1969, there have been separate licences for those passing their practical test in manual and automatic cars. A manual licence entitles you to drive vehicles of either transmission, while an auto licence restricts you to just one. With this in mind, most candidates opt for the manual test, giving them the widest range of options later on. However, as the number of automatic cars on our roads is higher than ever, it’s worth asking whether auto licences have become more popular, too.

Luckily, we here at PassMeFast love digging into the stats and delivering comprehensive guides to everything in the world of motoring. We’ve collected all the facts to give you an insight into the popularity of automatic licences today. Let’s get started!

How many drivers have automatic licences?

Once upon a time, the UK was a nation of manual car drivers. Even as automatics ran rampant Stateside, we Brits stuck with our trusty gearsticks. Nowadays, though, the picture is less clear. Manual cars do still, by some distance, make up the majority of cars in Britain. However, of the 37 million vehicles on our roads, 8.4 million are now automatics, according to figures from the SMMT. That’s a massive increase on figures from 2007 (70.5% higher, to be precise). Indeed, some are even predicting that most new registrations will be automatic cars as soon as 2020.

With this in mind, many drivers decide it’s best to pass in a manual and be able to choose between the two gearboxes later. Those with automatic licences, meanwhile, need to stick with the transmission for good, unless they later choose to take a test in a manual car.

Taking the above into account, it may not come as much of a surprise to learn that those with the plain old category B licence far outnumber those holding automatic licences. Indeed, as of November 2018, there were just 829,277 auto licence-holders in the UK. That’s just 1.3% of the UK population, and far behind the 39,688,706 with manual licences. However, while this confirms the relative rarity of automatic licences, it doesn’t say anything about how their popularity has changed over time. It’s time to dig a little deeper…

Is the number of automatic licences increasing?

To take a look at whether auto licences are more popular now than before, we turned to the DVLA’s statistics on UK driving licences. Data concerning both automatic and manual licences are available dating back to 2012, so we started by examining the raw numbers. Here’s how things stood over the six-year period up to 2018.

It’s clear from the figures above that the number of automatic licences is much higher now than it was back in 2012. In fact, it’s risen by 289,319—a whopping 52.6% increase. Considering that this licence category has been around since 1969, that’s a huge shift over just a six-year period.

However, there are also an extra 2.5 million manual licence-holders now compared to 2012. Additionally, there are tens of millions of category B licences, compared to less than one million automatic licences. That’s why looking purely at figures isn’t enough. Instead, we need to examine how big the share of auto licence-holders is—so, we did just that. 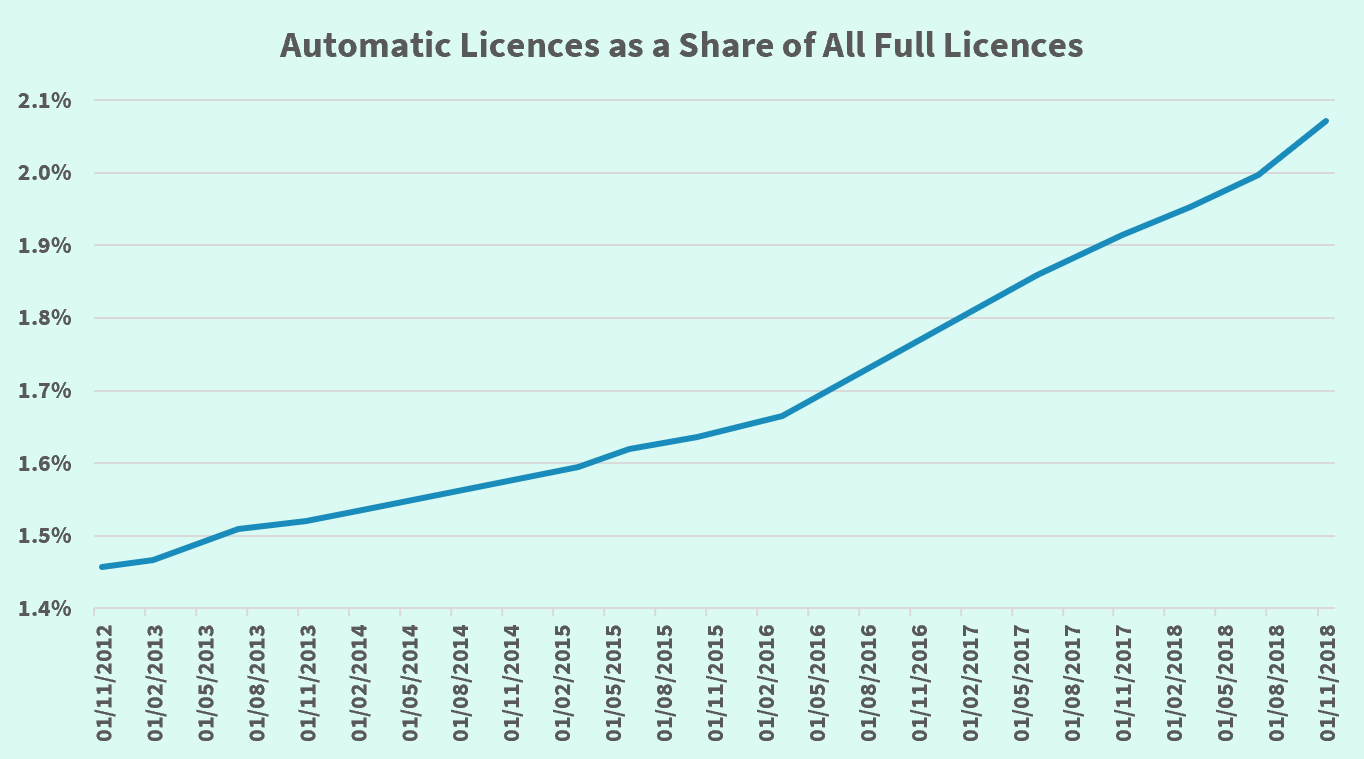 The above graph shows that automatic licences now represent a greater proportion of all full licences than back in 2012. Moreover, the rate of the increase seems to be going up, too, making this an exponential rise. So, while it’s not exactly likely that automatic licences will supplant regular category B as the most common licence type any time soon, it does appear that more of us will be turning to auto tests in the future. 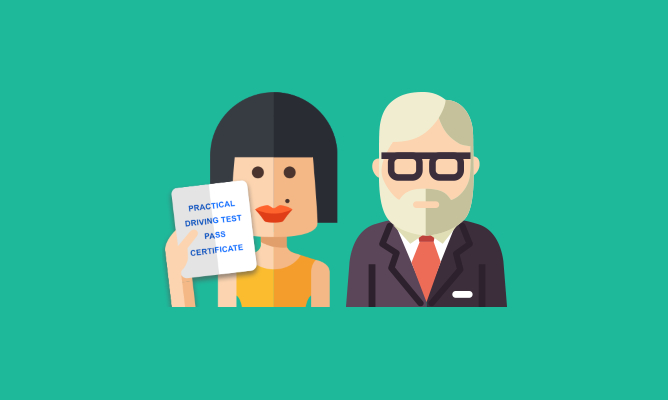 Of course, while we’ve touched upon the subject of obtaining automatic licences, we haven’t yet covered the specifics of doing just that. Indeed, it would be remiss of us to write this article without covering the number of automatic driving tests. After all, there’s no other way to get an auto licence than to take a test in an automatic car!

So, how many candidates are taking automatic tests—and how does it compare to the number of manual tests?

In the graphs above, we can see that the number of manual tests taken since 2007/08 has fluctuated dramatically. Additionally, while numbers have recovered from their mid-decade low, they’ve not yet managed to recover to the high point seen at the beginning of this time period.

For automatic tests, however, it’s an entirely different story. The number of automatic tests remained stable when fewer people were learning to drive due to the financial crisis, and has risen since. Back in 2007/08, there were only 70,429 auto car driving tests conducted. Fast forward to 2017/18, and that number was 163,790.

This is, of course, still some way behind the number of manual tests. However, the gap is closing. Back in 2007/08, there were around 25 manual driving test for every one taken in an automatic. Now, there are around 10 manual tests for each automatic.

Compare the change between 2007/08 and 2017/18, and the difference is stark. The number of manual tests fell in this time period by 2.5%. It’s only a modest drop, but when you consider that the number of automatic tests rose by a huge 133%, it highlights the fact that autos are ascendant. 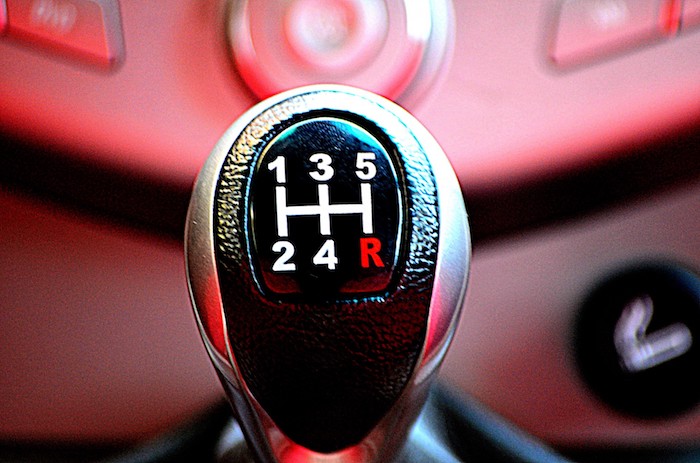 With automatic licences, cars and tests all on the up, it may be tempting to believe that Britain’s love affair with the gear stick is finally drawing to a close. (And that’s without even mentioning the potential for self-driving cars to dominate the roads in years to come!)

Nonetheless, we’re unlikely to see manual cars disappear from our roads any time soon. For starters, as noted, almost 98% of UK drivers have licences allowing them to drive manuals. While plenty are now choosing automatics, cars with a traditional gear stick still hold a slight edge when it comes to new registrations. And let’s not forget the many, many vehicles on the road which aren’t new—amongst which manuals hold a significant lead.

In time, it is probable that manual cars will become an increasingly small minority. For now, though, they’re still top dog here in the UK—and, with a large number of drivers favouring manuals for their control and responsiveness, they’re unlikely to ever completely go away. 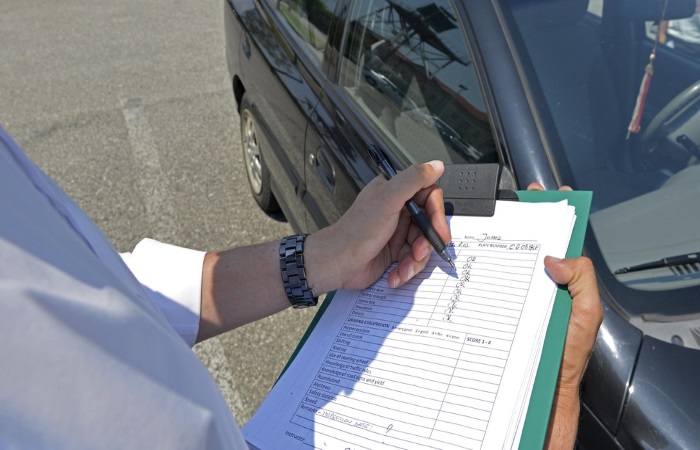 In terms of format, there’s no difference whatsoever. Both tests consist of the same basic components, including:

The key differences are the transmission you’ll take the test in and the licence you’ll receive if you pass it. If you pass in an automatic, you won’t demonstrate to the examiner your ability to perform gear changes or display good clutch control. As such, it won’t be clear that you have the required level of competence to drive a manual car, and you’ll only be able to drive automatics. Pass in a manual, and you’re free to drive both.

② Will it be easier to pass my test in an automatic car?

It may come as a surprise to learn that automatic pass rates stand far below the overall average. In fact, in 2017/18, only 38.9% of tests in an automatic car resulted in a pass, compared to the average pass rate of 46.3%.

Given the perception of autos as easier to drive, this stat is certainly unusual. There are no clear reasons why this is the case, but a higher concentration of automatic cars in large cities, which have lower pass rates overall, may go some way to explaining it. To get a fuller picture, check out our article on manual vs automatic pass rates.

While the gender gap that once existed between men and women in terms of driving licences has shrunk, there are still around 3.5 million more male category B licence-holders than female. However, when it comes to automatic licences, the situation is reversed. Of the 829,277 category B (auto) licences, women hold 608,087, while men account for just 221,190 of the total.

④ What if I pass my test in an automatic car and want to drive a manual later on?

There’s no entitlement for automatic licence-holders to drive manual cars—you need to upgrade your licence. This means passing the test again in a manual car.

If you decide to upgrade, you won’t need to apply for a new provisional. You will, however, have to follow the usual rules that apply to any other learner driver, such as displaying L plates on the front and rear of your car.

You’ll also need to pay the same fee for the practical test as you would if you were taking it for the first time. (At this point, you can probably see why most drivers skip this extra cost and take their test in a manual to begin with!) If you do fail your test in a manual car, it’s not back to square one. You’ll still be able to drive your automatic; you just won’t be able to drive manual vehicles.

⑤ What are the advantages to getting an automatic licence?

If you’ve read some of the negative points above, you may wonder if it’s ever worth going to the trouble of obtaining an auto licence. Don’t be discouraged! Getting your licence means the freedom to take to the road—and, if you know you’re going to be looking into getting yourself an automatic vehicle after passing, learning how to actually drive one makes good sense.

It’s certainly true that taking your test in an automatic isn’t a panacea. If your driving skills just aren’t up to scratch, switching transmission won’t solve it—the only solution is more practice! If, however, you’re having specific trouble with gear changes or clutch control, going auto could be the remedy you need.

To get more information on the two types of gearbox, check out our guide to automatic vs manual cars. Don’t forget that PassMeFast offers courses in both transmissions, too—learn more at our automatic driving courses page.