If you’re used to driving in Europe, coming to the UK in a car can seem like a daunting experience.

You might have heard that there’s a completely different driving culture to get to grips with when you arrive here, for instance, or that there’s tonnes of legislation that you’ll need to sift through.

It needn’t be difficult though—we’ve detailed all the major differences between driving in Europe and the UK in this helpful guide. 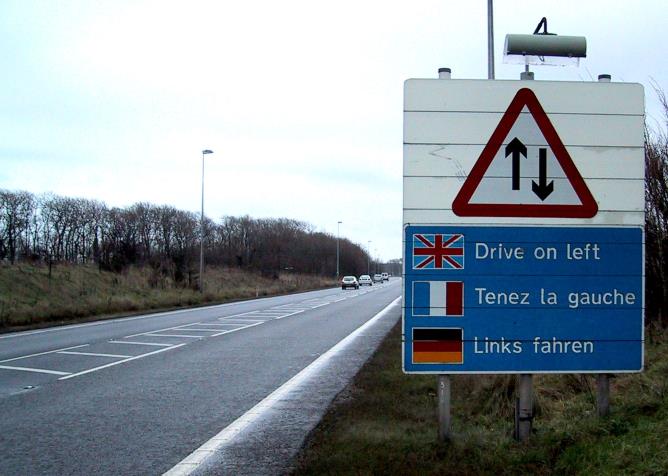 Of course, the most significant difference between driving in the UK and driving in Europe is that in the UK we drive on the left-hand side of the road, rather than the right. England, Wales, Scotland and Northern Ireland are part of a small number of countries that operate under this system, and it can seem quite unintuitive at first. Naturally, driving in an unfamiliar environment has the potential to impact on your and other road users’ safety. Here are some things you need to be aware of:

This doesn’t even touch upon the process of learning to drive, which can vary dramatically from country to country. To get a handle on everything from coordination tests on 80s Spanish computers to Swiss psychological evaluations, check out our guide to driving tests in Europe. Nonetheless, EU member states (alongside a few selected other European nations) are amongst the countries whose licences are valid in the UK.

Remember that, even if it seems daunting, it can be a good idea to take a practical test in your country of residence. Learn more at our January 2019 news roundup.

Driving a left-hand drive (LHD) car in the UK

The advice detailed above will provide you with a solid foundation for driving in the UK, but if you’re driving a left-hand drive car then you need to take a few extra precautions as a matter of course. This is for a number of reasons.

Firstly, your visibility will be greatly reduced compared to if you were driving a right-hand drive car. In fact, you’ll probably have a better view of the pavement than you will of the road!

This reduces your margin for error significantly, so you should drive with extra care and leave more distance between you and other cars than you would when driving in Europe.

Also, when overtaking, if at all possible you should ask a passenger to check if it’s safe to do so. It may be best to avoid overtaking altogether in a left-hand drive car.

Equally, be careful not to drift into the centre of the road. It might feel natural, but you risk blocking oncoming traffic or even causing an accident by doing this.

Another thing you need to do is apply headlight adapters. These are small stickers that you have to affix in a particular place on your headlights, which are necessary to ensure that other road users don’t get dazzled.

While many people do drive LHD cars in the UK temporarily, in the long run it’s advisable to invest in a right hand drive car.

Fancy a bit of entertainment? Check out this article on the PassMeFast Emergency Stop Game!

This might seem a bit confusing to begin with, so we’ve created a helpful table to give you an approximation of the difference between the common EU and UK speed limits. 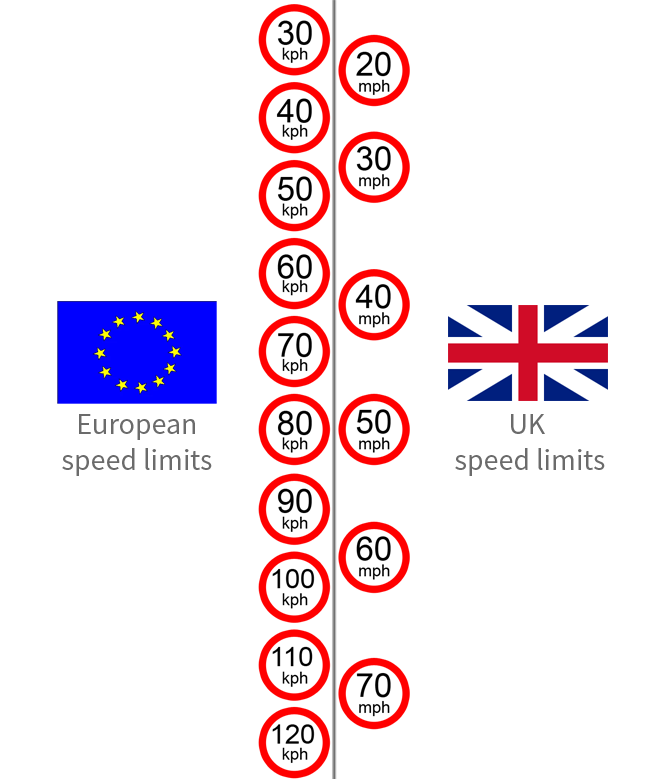 Different types of road in the UK

There are three different types of road in the UK. These are:

Knowing the importance of these classifications is important, but the name of the road doesn’t tell you all you need to know. For instance, there may be some impeccably-surfaced B roads, and some very rough and poorly-maintained sections of motorway.

Still, in general, driving on each type of road presents a unique set of challenges. We’ll start out with motorways.

Driving on motorways and other dual carriageways

The first UK motorways were built in the late 1950s. Since then, the network has expanded significantly, and there are now more than 2,000 miles of motorway. It’s highly likely that you’ll need to use this type of road when travelling between major cities or urban conurbations.

Motorways are fast roads where pedestrians are forbidden. For a more detailed look at motorway driving, check out our ultimate guide. Dual carriageways (except for those in built-up areas) are very similar.

Unlike certain countries in Europe, the speed limits on motorways in the UK don’t necessarily change depending on the weather. However, you should always take special care when driving in any adverse weather conditions. Also, temporary speed limits may be put in place. These will be visible on screens such as the ones pictured below.

Also in contrast to many countries in Western Europe, the vast majority of our motorways are toll-free. There are a few notable exceptions to this rule (i.e. the M6 Toll), but by and large you won’t have to pay to travel.

If you’re in need of further clarity on any aspect of UK driving law, it’s a good idea to consult the Highway Code. Also, if you fancy yourself as a bit of a driving trivia buff, why not check out our guide to the history of the Highway Code?

Driving on single carriageway A roads

A single carriageway road is one without a central reservation in the middle.

Driving on single carriageway A roads should be fairly straightforward. One of the main things to watch out for is that the speed limits will vary from road to road, but signs may not be very prominent.

A good rule of thumb is that if there are street lights on the side of the road, then the limit will be 30 mph. This speed limit tends to be put in place in built-up urban areas.

The 40 and 50 mph speed limits tend to be on roads that aren’t as built-up, but aren’t suitable for the national speed limit (60 mph) either. Pay special attention to hidden bends on roads like these.

The national speed limit of 60 mph will be made clear by a white circular sign with a black ‘stripe’ through it, such as the one pictured to the right.

Driving on country lanes presents a different set of challenges. While these roads are usually B roads, the national speed limit is often in place.

This means that technically, you can drive at speeds of up to 60 mph. However, you are likely to come across blind bends, poorly surfaced roads, or even hazards such as wildlife on roads like these. For this reason, it’s crucial to use your judgement and drive at a more appropriate speed. Always err on the side of caution in situations like these.

In very built-up urban areas, the speed limit will often be 20 mph. These 20 mph zones will generally be densely populated, and there may be areas where large numbers of pedestrians gather, such as around schools. Take extra care when driving here.

For more advice on day-to-day driving, take a look at our driving tips section.

Even if you don’t recognise exactly what a road sign means, you should be able to tell what type of sign it is by its shape. These are: 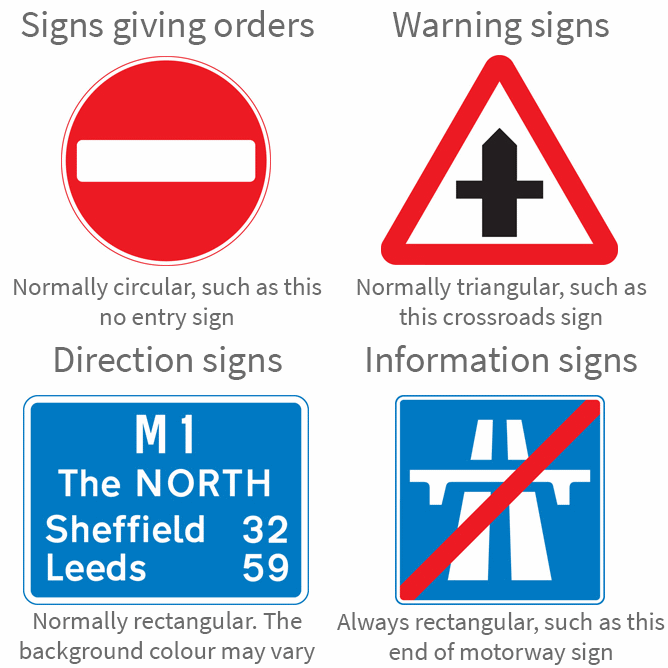 You can find a comprehensive guide to UK road signs over at the government website.

When driving in the UK it’s a legal requirement to have the appropriate insurance, even if you’re only in the country for a short period of time.

There are three types of insurance that you can opt for:

If you’re only in the country for a short period of time, it will probably be possible to arrange cover with your European insurer. If not, companies like the RAC offer short-term insurance.

What to do if you have an accident

Thankfully, the UK is generally a very safe place to drive. Still, if you have an accident, you need to be aware of the correct procedure to take.

First of all, STOP! Even if you think the accident was very minor, you need to stop to make sure everything’s alright. Bring your vehicle to a complete halt, turn off your engine, and turn on your hazard lights.

When you get out of the car, make sure that you’re safe from any oncoming traffic. If at all possible, everyone in the car should get out of the passenger side.

Then, if anyone has been injured, you should call 999 and ask for the ambulance service. The police need to be alerted as well—either if you feel there was an element of foul play involved in the accident, or if the road is blocked.

If no one’s been injured and you didn’t need to call the police, you should still try and collect the names, addresses, and phone numbers of anyone else involved in the accident, and/or any witnesses. It may also be useful to take a picture of the accident. This will all be important for insurance purposes.

One thing you want to avoid at all costs when driving in the UK is getting on the wrong side of the law. The laws are there for the safety of you and everyone else, and the penalties for breaking them can be very severe. We’ve outlined a few key areas of driving law below.

Speed cameras are in place to deter people from breaking the speed limit. You will always be warned of them by a sign such as the one to the right.

There are two main types of speed camera: ones which instantly detect your speed as you pass them, and ones which measure your average speed over a set distance. This latter type is most common on motorways.

The penalties for breaking the speed limit vary. You could just receive a verbal warning, or you could be prosecuted and fined up to £1,000. It’s up to the police to decide at their discretion which penalty would be most appropriate.

The police are very strict when it comes to seeing people using their mobile phones while driving. If you’re caught texting or making a phone call, you will be fined at least £90.

Hands-free devices are legal, but if the police suspect that you are unduly distracted then they have the right to stop you and potentially issue a fine.

The drink driving limit in the UK is 80 milligrams of alcohol per 100 ml of blood. There are severe penalties in place to deter people from breaking this law—you could have your licence taken away from you and/or face a fine of up to £5,175.

We’d always advise against drinking at all before driving—it’s simply not worth the risk.

Well, that should be pretty much everything covered—we hope we’ve clarified the differences between driving in Europe and the UK.

That’s not all we’ve got to offer, though! Planning a trip abroad and want to take a car? Make sure you’ve read our advice on driving on holiday. Or, if you’re interested in learning more about driving licences in general, why not read about the history of the UK driving licence?  Or, if you prefer thinking about the future to reading about the past, check out our article on driverless cars.