You’re driving along and a speed camera looms before you. There hasn’t been a speed limit sign for a while—and suddenly you realise you’re not 100% sure how fast you’re meant to be going. “What’s the speed limit?”, you ask your road trip buddy. “Oh, it’s the national speed limit”, they reply. All fine and dandy… as long as you know what that is.

From studying for your theory test to road tripping around the UK, the national speed limit is one of those need-to-know-at-all-times pieces of driving law. It can also be confusing, especially to new drivers. Not to worry, though: we’ve put together a guide explaining exactly what it means, which specific speeds it’s referring to and how you can tell when it’s in force.

What is the national speed limit in the UK—and when does it apply?

The national speed limit simply means the default maximum speed permitted on any given road.

Easy enough, right? Unfortunately, knowing when the national speed limit is in force is only half the battle. The speed limit itself varies, depending on both the type of road and the category of vehicle you’re driving. 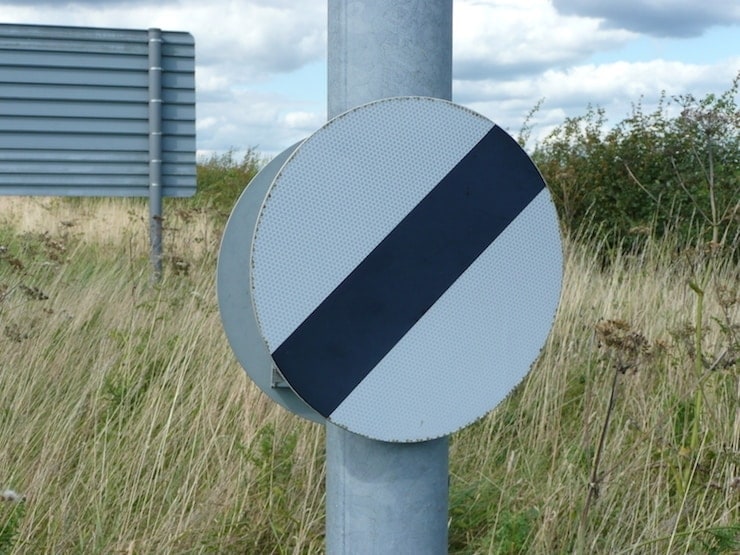 Like other UK speed signs, the national speed limit sign is circular. But because it can mean different speeds on different roads, the sign doesn’t show a specific number. Instead you’ll see a black stripe running diagonally across a white background—bottom left to top right. You might find it as a standalone sign, or affixed to a lamppost, like is shown in the picture above.

How well do you know your road signs? First step: check out our simple guide to UK road signs. Then take our quiz to find out or test your knowledge against road sign mock tests in our list of ultimate of theory test revision resources. 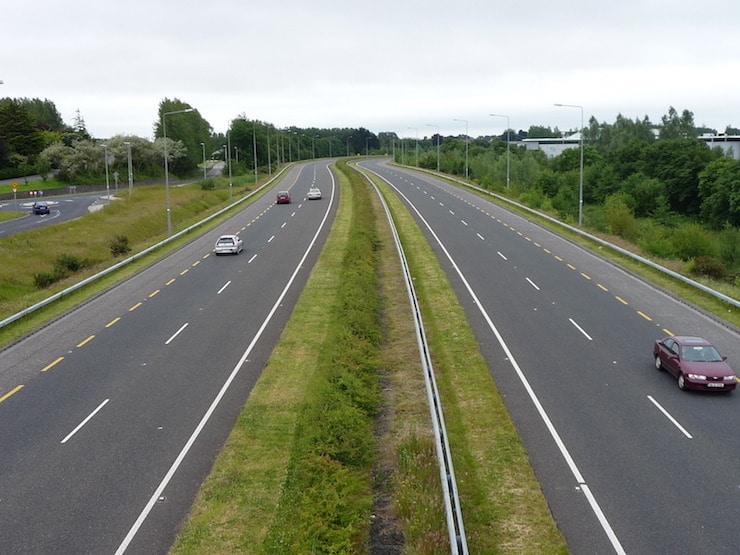 The national speed limit in the UK for a car on any dual carriageway in the UK is 70 mph.

Many learners think that dual carriageways are roads with at least 2 lanes for travel in each direction—but that’s not actually the case. In fact, they’re any road that is divided by a central reservation (some kind of physical barrier). Most often you’ll see a grass verge or a metal barrier separating the carriageways, which serve to reduce the risk that a vehicle will end up in a lane facing oncoming traffic. Motorways are one of the most obvious types of dual carriageways, but many major A roads are also included in this category.

You will typically see the national speed limit sign at the start of a dual carriageway—but remember, it only applies until the next speed limit sign you see. The introduction of more and more smart motorways means that speed limits are able to be altered electronically by operators, who respond to factors like traffic flow and accidents. This helps to avoid stop-start traffic, and keeps you moving—albeit at a slower pace. It also means you need to keep your eyes peeled for different speed limits in force on different sections of the road. 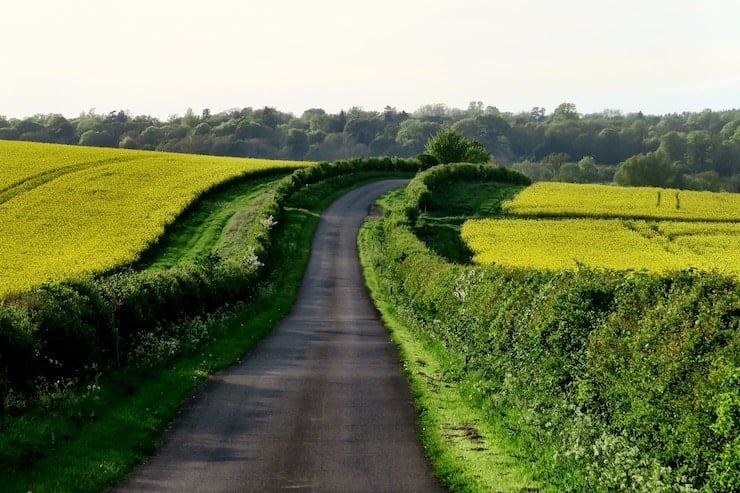 The national speed limit in the UK for cars on single carriageways is 60 mph.

Single carriageways are roads where traffic going in either direction is not separated by a central reservation. In other words, if you were to cross the road as a pedestrian, there would be no physical barrier that you would have to navigate in order to reach the other side.

So, technically, a narrow, winding country lane can be subject to the same speed restrictions as a road with 3 or 4 distinct lanes. And that’s where your judgement comes in. 60 mph is the absolute maximum on single carriageways—and you don’t have to be breaking the speed limit to be driving too fast. You must also be able to remain in control of your vehicle at all times, and anticipate hazards along the way.

The lowest national speed limit of all is that which is present within built-up areas: 30 mph. You will typically see a 30 mph sign to indicate this when you enter a city, town or village. In the absence of any speed limit sign, you should (as on all roads) assume that the limit of 30 mph applies within a built-up area.

So why is the speed limit much lower here than on other single carriageway roads? Well, it reflects the fact that built-up areas tend to carry high risks of pedestrians stepping into the road, or opening car doors as you drive past. Streets in built-up areas also tend to be quite narrow—particularly if vehicles are parked on either side. Swerving to avoid a hazard could put you into the path of oncoming traffic, so it’s important that you’re able to stop quickly if you need to. In an emergency situation, it takes 23 metres to reach a standstill when travelling at 30 mph. If you do collide with a pedestrian or vehicle, you dramatically decrease the risk of serious injury by keeping to the national speed limit.

What counts as a ‘built-up area’?

You can usually tell that an area is built-up if it has street lighting. Technically, a road is only a ‘street’ if it has more purpose than getting drivers from A to B, i.e. it’s a specific place. There must be 3 or more street lights in a row, no further than 183m (about 14 seconds at 30 mph) apart.

① How is the national speed limit enforced?

Just like with other speed limits, speed cameras are often used to detect motorists who are breaking this law. These can be static cameras (including average speed checks), or operated by a police officer or car. Failure to keep to the national speed limit can result in a fine, points on your licence, or a speed awareness course. If your speed is a factor contributing to a collision, the consequences may be even more serious. To learn more about new innovative ‘speed on green’ and long-range cameras, visit our February 2019 news roundup.

② Is the national speed limit the same for all vehicles?

No. The national speed limits in this guide only apply to (non-towing) cars, motorbikes and car-derived vans. Other vehicles have to go slower on certain roads. Check out the limits for all other vehicles to make sure you’re complying to the law.

③ What other factors should you consider when deciding on your speed?

When any speed limit applies, you need to remember that it is a maximum speed, rather than a target. It is always down to you to use your discretion to travel at a sensible pace.

Here are some things you need to factor in:

④ How accurate are car speedometers?

Your car’s speedo is probably not 100% accurate, because it all depends on things like your tyre pressure. In the UK, speedometers are never allowed to tell you you’re going slower than you actually are. They might give you a slightly higher reading (up to 110% of your actual speed, plus 6.25 mph), but you shouldn’t count on any inaccuracy as an excuse to speed: that won’t fly in the event that you’re caught.

⑤ At what speed do you get a ticket?

Okay, so you won’t usually be issued with a speeding ticket unless you’re going at the speed limit plus 10% plus 2 (so, for instance, 35 mph in a 30 zone). But even if you’re travelling just 1 mph above the speed limit, you’re breaking the law. Police officers can use their discretion, and might choose to pull you over even if you’re only just over the limit.

⑥ What is the speed limit on country lanes?

Most rural, country lanes are single carriageway roads, so, unless there is another sign saying differently, they are subject to a 60 mph limit. However, this is the absolute maximum speed you should do, and in many places the road layout will mean you should go more slowly. Reduce your speed as you approach corners or the brows of hills. You should also bear in mind other road users, as country roads are often narrow, and unlikely to have pavements.

You can get more top tips on driving on different types of roads with our article on city vs country driving.