If you’re looking to exchange your foreign driving licence for a UK driving licence, you might be a bit confused by the sheer volume of rules and regulations involved. The process can vary depending on where your original licence was issued and whether you’re officially a resident of Great Britain. If you do fit the bill, however, you might be able to exchange your foreign licence right away—meaning no additional tests!

In this guide, we’ll look at whether you’re eligible to exchange your foreign driving licence to a UK driving licence and what the actual exchange process entails. We’ll also offer up some additional advice for foreign licence holders looking to drive in the UK. Let’s take a look below, shall we?

For starters, before we can get into the nitty gritty of what the licence exchange process entails, we first need to look at whether you’re actually eligible to exchange your foreign driving licence. Your eligibility will hinge on your answer to this question: are you a resident of Great Britain? According to GOV.UK, you’re a resident if you have a permanent address in Great Britain that you’ve lived in for at least 185 days. If you are a resident, then you can proceed with our guide and look at how you’d go about exchanging your licence below.

We’re going to look at how the rules for exchanging your foreign driving licence will vary depending on where your licence was issued in the section below.

Eligibility for exchanging to a UK driving licence

Countries in the EU or EEA

Whilst you are allowed to drive in Great Britain on your original licence, you can still exchange your foreign licence for a UK one at any time if you so wish.

If you’re a resident of Northern Ireland, you’re in luck—the rules couldn’t be any easier for exchanging your licence for a UK driving licence. As long as your licence was issued on or after 1 January 1976, you’ll be able to exchange it. And the best part? You won’t have to pay a penny for it!

Residents of Jersey, Guernsey or the Isle of Man

Any residents from Jersey, Guernsey or the Isle of Man will be able to exchange their licence if it was issued on or after 1 April 1991. Unlike residents of Northern Ireland, however, you’ll have to pay the standard exchange fee. You will also have to provide a medical report (D4) filled in by a doctor.

If you don’t belong to any of the above countries, then you won’t be able to exchange your foreign driving licence for a UK one. That doesn’t mean you should give up on driving in the UK, however! You’re still allowed to drive for up to 12 months on your foreign licence. According to the DVLA, you’re allowed to drive vehicles weighing up to 3.5 tonnes—with up to eight passenger seats—as long as your licence remains valid within the 12 month period. If you want to continue driving in the UK once this year is up, you’ll have to take a theory and practical test to get your hands on a UK driving licence.

Need to book a theory and practical test? Get PassMeFast to fast-track them for you. We even offer shorter intensive courses if you’re looking to iron out any bad habits you might have picked up!

If you’re looking to exchange a vocational licence for a UK driving licence, then you’ll need to fill in an application for a lorry or bus (D2). If your vocational licence was issued in an EC/EEA country, you’ll also have to provide a D4 form if you’re 45 or over.

Whilst we’d love to tell you that’s all there is to it, the process for exchanging your foreign driving licence isn’t as cut and dry as it seems. There are a few more niggly rules that could cause a couple of bumps in your journey towards getting a UK driving licence, as you can see below…

Now that you’re sure you’re actually eligible to exchange your foreign driving licence for a UK one, we’re going to look at what that process entails. Fortunately, it’s pretty straightforward. To start, you’ll need to head on over to GOV.UK and send off for your application pack. You’ll receive this by post to your UK address. Most applicants will only need to send off for order form D1. Others will need more than one form, however: if you’re a resident of Jersey, Guernsey or the Isle of Man, for example, you’ll need D4 as well.

Once you’ve received your application form(s), you’re one step closer to the finishing line! All that’s left is for you to provide the following documents in your application:

You need to send off your application to: DVLA, Swansea, SA99 1BT. Once that’s sorted, you’ll receive your UK driving licence in approximately three weeks. The DVLA will send your original licence to the foreign issuing authorities. 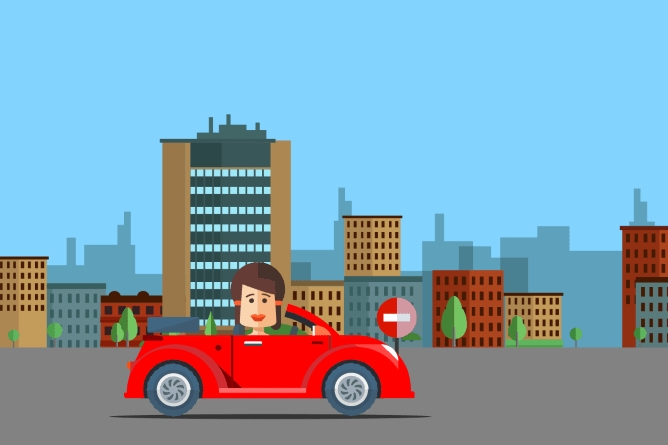 Familiarise yourself with the Highway Code

If you’re taking to the roads in the UK then it’s a good idea to read up on the Highway Code. No matter how confident you are with your driving, you need to be sure that you’re familiar with the rules of the road in the UK. The Highway Code is a set of rules and guidelines that are in place to keep all road users safe. As such, it’s a must-read for anyone on the road. You can start reading it right now on GOV.UK. Want to test your knowledge? Take a few Highway Code quizzes!

When you receive your UK driving licence, you should make sure you know exactly what rules and restrictions are in place for the vehicle you drive. You can find this information on the reverse side of your licence. If you turn your card around, you’ll find a table of vehicles and codes. This will tell you what vehicles you are and aren’t allowed to drive. It will also contain additional conditions that you must follow when driving in the UK. Find out more in our guide to driving licence codes. If your personal details change, you can get your licence updated to reflect this. Here’s how to change the name and/or gender on your licence.

Sort out your car insurance

If you’re driving in the UK, whether on a foreign licence or your new UK driving licence, you’ll need to make sure the vehicle you’re driving is insured. It is illegal to drive in the UK without insurance. The minimum insurance you need is third party cover, though it might not be your cheapest option. If you’re looking for ways to save money on your car insurance, you might want to look at: what to check for when you’re buying car insurance or our guide to black box (telematics) insurance.

If you’re not entirely confident with driving on the roads in the UK, there’s an easy, sure-fire way to boost your confidence: a quick refresher course. As the name suggests, these courses are for people who just need a few hours or so to iron out their bad habits and get to grips with the more advanced aspects of driving. PassMeFast has three refresher courses to choose from—5 hours, 10 hours or 15 hours—depending on how much guidance you need with an experienced ADI. To book in, give us a call on 0333 123 4949 or book online.

① How do I find out if I’m eligible to exchange my foreign driving licence?

You can find out if you’re eligible to exchange your foreign driving licence for a UK one by using GOV.UK’s licence exchange entitlement tool.

② Does the 12 month period restart if I leave the UK and come back?

If you’re a visitor  to the UK, then yes, your 12 months would start again once you came back to the UK. If, however, you’ve since become a resident of the UK, then this 12 month period does not restart.

③ Will I be able to drive a manual car if my original licence is for automatic transmission?

Nope. If your original licence says that you passed your driving test in an automatic car, then you will only be able to drive automatic cars. If you’re that keen to drive a manual car in the UK, you’ll have to take an additional test.

④ How long will it take for the DVLA to send me my UK driving licence?

The DVLA states that it will take around three weeks for you to receive your licence once you’ve sent them your application pack. Bear in mind that this is an estimate—it might take longer if they need to do additional checks.

⑤ What are the minimum age requirements for driving in the UK?

⑥ I need to take a driving test, how do I book one?

If you’re required to take a driving test in order to get your hands on a UK driving licence, it’s as simple as heading on over to GOV.UK to book your test. Bear in mind, however, that driving test waiting times can be long. If time is of the essence, you can get a fast-track practical test with PassMeFast.

⑦ Can I import my vehicle to the UK?

Looking to bring a vehicle into the UK permanently? You’ll have to: inform HMRC, pay VAT and duty, get vehicle approval and register and tax the vehicle. You’ll also have to insure it before you drive it on UK roads. Only going to be driving in the UK for 6 months or less? You’ll need to look at the rules for temporary imports.

⑧ Do I need insurance if I’m only going to be in the UK for a short time?

Yep! It is illegal to drive on the roads in the UK without car insurance, so we really wouldn’t recommend you pushing your luck without it. Third party cover is the minimum insurance cover legally required. With it only covering damage to other vehicles and property, you might want to look at: third party, fire and theft cover or comprehensive cover.